Local issues have me preoccupied so my Pruitt Education project remains on the back burner.  Besides we have a critical election coming up and too many are still being way too complacent.  Though the following is off topic to confronting science contrarians, the example below clearly demonstrates what I mean by confronting the lies.

First a look at the petition in question, next will come a closer look at the organization driving this effort.  After that I'll finish this triple header by sharing the story about a recent local community meeting and what democracy in action looks like.  This was originally posted as SaveLaPlataCounty's Recall Petition Examined - dirty tricks in action.

Save La Plata County (from what?)

We need commissioners who represent our interests above their own, and who govern with accountability and transparency.  (Of course!  Don't we all)  Commissioner Lachelt has not done that.  (False, look at the support rallying around her.)  She has repeatedly leveraged our public office for her private gain by appearing before the U.S. Congress and other federal government entities to advocate and advance her and her employer’s political and policy agendas under the guise of her role as our commissioner.  (False, she has been advocating for issues that we elected her to advocate for.  Those interests include protecting this environment that is our life support system!  Whether oil interests like it or not.)  Her county commissioner meeting attendance record further demonstrates where her allegiance lies. Her 2017 attendance record was much lower than any other commissioner.  (False, 91% v 95%.)

We can and should expect our commissioners to act ethically (We should be able to demand the same of their opponents!) and not to take actions that undermine the public’s trust in our local government.  (Lachelt has never done such a thing.  No evidence of wrong doing presented - beyond advocating for a healthy environment*, that is. Why has that become an impeachable offense?).  As a result of Commissioner Lachelt’s actions,  (Nowhere is specific misconduct presented.)  the county has been required to investigate ethics complaints filed against her and to seek out ethics advice from at least one other county.  (Malicious misrepresentation of the facts.  This same group filed and pushed that frivolous complaint which was dismissed at every level it was looked at.  Now they resurrect it yet again.  Pure dirty politics in action!)

For all these reasons, and more, we believe Commissioner Lachelt has acted in ways that have undermined the public’s trust 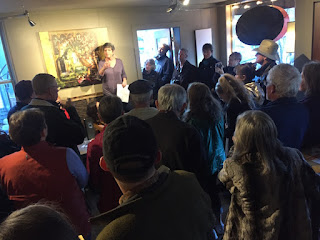 
(Outside agitators may not like Gwen, but the voters who put her in office are still very pleased with her!  What about our rights?  Don’t we get to be heard in this brave new world Koch allies are creating for us?)  and is therefore deserving of answering to us - her constituents  (Keep in mind this is not a home grown effort.  Furthermore, they ignore that Lachelt's constituents are standing behind her with renewed support, given the unDemocratic underhandedness of this Recall effort.)  - through the question of a recall so that we can restore trust, accountability, and transparency to that elected office. (Nice sounding words but make no mistake, this is an end run around the will of the La Plata County voters.) 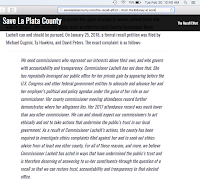 Restore trust, accountability, and transparency they say?  Save La Plata County!  Think about that title.  Can it get any more hysterical?  This is an attempt by outside forces to escalate political tensions and resentments between neighbors, for an extreme right wing power-political agenda.

The cynicism appalls, this is a transparent ploy by oil and unfettered anti-regulation interests to undermine our democracy. Keep in mind industry’s “regulations” are our health and safety “protections,” and the oligarchs are the ones who hate them.  We The People need them.

We also have a right to expect honesty and facts to dictate something as important as recalling a duly elected official.  This petition is about a difference of priorities between citizens, it's what our democracy was made to deal with.

"Fellow La Plata Commissioners Blake, a Republican, and Westendorff, a Democrat, both oppose the recall effort."

It was the first of three Land Use Code Drafts for crying out loud!  Okay, they got a lot wrong and they got the message, all three Commissioners.  The second draft will look quite different and the third draft will have yet more refinement to satisfy most people, but we all agree they'll never satisfy everyone.  That's why in America a spirit of compromise was  traditionally a big deal.

What's going on with this petition is part and parcel of the Koch and pals master plan of turning back protections which they have been doggedly trying to undermine for decades.  While SaveLaPlata claims independence from AFP, the interconnected web of DarkMoney organizations affiliated with their connections and sources beg to argue differently.

These few petition boosters also disregard the fact that a very large portion of La Plata County citizens do believe the oil industry should assume more responsibility.  We voted for Gwen precisely because she stands up to the bullying of oil interest groups.  What about our constitutional right to be represented?

We citizens also recognize that no matter how difficult, even distasteful, modern reality dictates that we must develop a new Land Use Code, it's a part of living in today's crowded shrinking world, no matter how much it smacks against some idealized notions of freedom and libertarianism that may have worked wonderfully in past centuries and in western movies, but this is today, we gotta deal with reality.

Last thing I want to mention is that the petitioners and their three supporting articles are all dripping with a self-certain contempt for environmental concerns.  Thing is, We The People are concerned for our "environment" because we appreciate it's the  life support system for all of us!   We depend on it, we need it healthy, we need to learn to pay attention to it.  I wish these petitioners could get the oil out of their eyes and start looking at the big picture and the realities of the crowded future that's in front us.

For the record, I know who Gwen is, we've exchanged a few words, and I've voted for her and will do so again - but, to be clear, this is my completely independent citizen's project, driven by my own abiding concern for where the Koch team is trying to take us and our country.

. . . Lachelt’s past activities do differ from the other commissioners in one regard, one that has been important to rural landowners large and small. Lachelt has long been an advocate for surface owners and the environment since drilling for natural gas from the rich Fruitland coal bed formation blossomed in the 1990s.
Surface owners have Lachelt, among a few other leaders, to thank for increased, but realistic, well setback requirements, and well site noise and truck traffic limitations.
Individual surface owners, faced with dealing with much more practiced drilling companies, have greatly benefited from having local organizations, which included Lachelt, to turn to for advice.
The result is a more collaborative working relationship between drilling companies and the county and surface owners.
In La Plata County, in many cases, drilling rigs are less likely to be on visible ridges, multiple wells are more closely clustered and well site motors are quieter. What was created in La Plata County over the past several decades could be considered a model for Colorado’s other counties where exploration and drilling for natural gas occurs. ...
Posted by citizenschallenge at 8:49 PM