I believe, consciousness, “mind,” can’t be understood by studying modern people in these modern times.  It requires an evolutionary perspective of the natural, biological forces at work in concert with geologic processes that produced creatures that eventually evolved into us.  It me it seems rather self-evident that our current masterpiece body/mind is the result of hundreds of millions of "experiments", untold iterations unfolding over an unimaginable expanse of seasons and generations.

So how can we ponder the human brain and mind without appreciating how it evolved out of the mammalian body plan and life style. 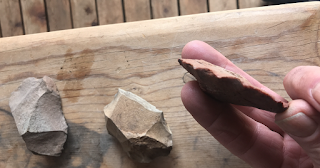 A couple years ago I realized that for all the talk about body-mind, consciousness, perception, reality, or no reality, there’s a most fundamental divide, that I believe, needs to be explicitly enunciated and thought about.  A prerequisite before anything else can really start to make sense.

Physical Reality is the physical world of atoms, molecules, universal laws of physics and Earth’s laws of nature.  It is Earth’s dance between geology and biology and time and Earth's evolving creatures, (and one in particular that learned to contemplate the universe and its short life), along with everything else around us.

Human Mindscape is all that goes on inside of our minds.  The landscape of your thoughts and desires and impulses and those various voices and personalities who inhabit our thoughts.  The ineffable ideas that our hands can turn into physical creations, that changed our planet.

The me, myself and I, and all that unfolds within the thoughts just beyond the sparks and chemical cascades unfolding within our physical bodies and brains as they navigate their environments.

The evolutionary biologist and historian of science Stephen J. Gould wrote an essay in 1997, “Non-overlapping Magisteria” in an attempt to address the tension between scientific truths and religious truths.

His solution was the notion of “Non-overlapping Magisteria” which delineated two teaching “authorities” (magisterium), the “magisteria of science” and the “magisteria of religion.” It wasn’t his original idea, rather a continuation of a centuries old dialogue between scientists and the Catholic Church that I won’t get into.

In any event, Gould concluded there should be no conflict because each realm had its’ own domain of “teaching authority.” Since these “magisteria” do not overlap, they cannot contradict each other and should be able to exist in mutual respect.

When it first came out, I loved the idea because of my own struggling intellectual spiritual journey which was embedded within gathering and learning from sober scientific knowledge about this Earth and her story, while dealing with the spiritual aspect of ‘touching Earth’ and having experienced ‘God’s breath’ against my back, so to speak.

Gould’s idea was interesting and it gained a lot of attention and lively discussion, but in the end seems to have offered little to either side. For myself, the criticisms made sense and my enthusiasm faded away.

Still, the conflict kept echoing like an unresolved challenge as I increasingly engaged faith-shackled contrarians towards climate science and evolution.

In the years since I’ve kept learning more about Earth’s amazing evolution and geophysics and also the scientific process itself.

A process that’s basically a set of rules for gathering and assessing our observations in an honest, open and disciplined manner that all who understand science can participate in and trust because it is a community of skeptical experts who are always looking over each others should.  It’s also predicated on the notion fidelity to honesty and that truth matters.

Too many celebrity talkers have become so infatuated with the wonderful ideas their mind creates, that they lose sight of the actually physical reality they are trying to render.

Science seeks to objectively learn about our physical world, but we should still recognize all our understanding is embedded within and constrained by our mindscape.

Religion is all about the human mindscape itself, with its wonderful struggles, fears, spiritual undercurrents, needs and stories we create to give our live’s meaning and make it worth living, or at least bearable.

That's not to say they are the same thing, they are not!  Though I think they're both equally valid human endeavors, but fundamentally qualitatively different.

Religion deals with the inside of our minds, hearts and souls, Science does its best to objectively understand the physical world beyond all that, doing its best to factor ego out of the deliberations. 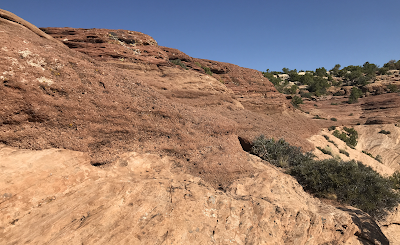 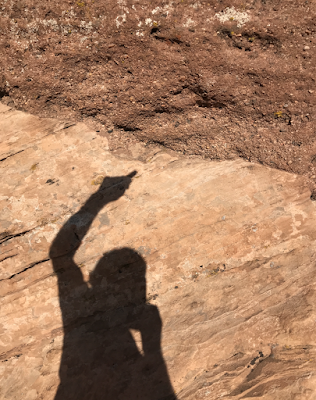 (Images are taken by myself.

Misc. stone tools found around our home, a reminder that the Stone Age didn't end with the cavemen.)

Cc’s Students’ Study Guide for The Case Against Reality.

I intend to be a witness for a fact based DeepTime,
Evolutionary perspective on our “human mind” -“physical reality” interface.

Donald Hoffman Playing Basketball in Zero-Gravity, a critical review of, The Case Against Reality:  Why Evolution Hid The Truth From Our Eyes, by Donald Hoffman, ©2019, W.W.Norton Company

We propose that selection favors nonveridical perceptions that are tuned to fitness. Current textbooks assert, to the contrary, that perception is useful because, in the normal case, it is veridical. Intuition, both lay and expert, clearly sides with the textbooks. We thus expected that some commentators would reject our proposal and provide counterarguments that could stimulate a productive debate. ...

(3.02)  Barton Anderson - Where does fitness fit in theories of perception?

(3.05)  Jacob Feldman - Bayesian inference and “truth”: a comment on Hoffman, Singh, and Prakash.

(3.06)  Chris Fields -Reverse engineering the world: a commentary on Hoffman, Singh, and Prakash,

“The interface theory of perception”.

(3.08)  Rainer Mausfeld - Notions such as “truth” or “correspondence to the objective world” play no role in explanatory accounts of perception.

explaining why I pursued this project.

Posted by citizenschallenge at 11:33 PM