Responding to malicious slander with a character reference.

When confronting science contrarians, we are dealing with people who have no serious evidence or honest science on their side, thus they have no interest in actually discussing these questions seriously.  Sowing confusion, divisiveness and inaction are their only goals.

That's why defenders of science will find that contrarian opponents are constantly diverting the discussion away from the issue at hand using amoral tactics such as attacking, belittling, even maliciously slandering the messenger, while ignoring the message.  Better yet, hit below the belt, frazzle their opponent into descending into the mud pit of insult slinging and losing all sight of the original discussion.

These tactics are intending to demoralize all who attempt defending serious science.  I've been at the receiving end more times than I care to remember.  Then the notorious Andrew Poptech took it to another level when he wrote up a vile fabricated fantasy about me.  In response I decided that it was time for me to start getting down'n personal too.  Here's that effort:

Recently over at Center For Inquiry's forum which I visit regularly, I was confronted with another joker repeating Poptech's conjured description of me as a guilt-riddled strung-out druggie and lost soul.  Poptech's slander is his way of responding to my fact checking, critiquing and challenging his claims.  Others of his persuasion have been quick to embrace the malicious trash talk.

It seems that every few weeks some new joker finds Poptech's article and gleefully grabs his ammunition and blasts aways at me in the middle of some other discussion.  That they are dealing with figments of their own imagination matters not one wit to them - it's character assassination they're interested in.

What else is there for someone who consistently misrepresents serious climate science?  They sure don't have solid evidence on their side.  Nor do they have the requisite intellectual curiosity to learn about the things they don't understand.  When something confuses them, assume the worst, with ignorant certitude.

There's a certain level of sick humor in reading how these minds can spin facts into tailor-made fictions - but of course, in the end all they want is to destroy any opponent in order to stifle fundamental climate science education - no commitment to honesty, or integrity, or respect for others.  Tragically absolutism and paranoia driven resentment seems all their hearts are capable of.

Admitting to and learning from mistakes is treated like blasphemy by the Republican contrarian crowd.  Nothing funny about that either.

It's irrational, irritating, stupefying and it certainly demands some sort of comeback.  But, I’m not into Poptech’s, or LandscapesandCycles' Jim Steele's or NC20 Burton’s style of childish messenger bashing, I like dealing with substance. 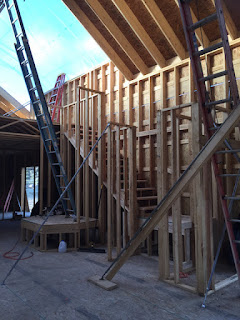 Hey D, I never did tell you the end of the story regarding those stairs.  As you might remember last autumn I endured a hernia.  It took months longer to get repaired than it should have, towards the end of that run I was actually invalided, bed to recliner, no lifting.  Innards all funky.  Not fun.  Feeling every bit of my sixty years and reconciling myself to the end of my sweet vigorous years.  Among other dark thoughts was the realization that my carpentry days were totally behind me now.  Which they are, but to ponder that I’d never be able to climb walls again, or help set beams and rafters, or one of my favorites building stairs - that's a different thing from choosing not to do it.  A proud physical old man wrestles with those realities as the 'diminishing' advances with the years.
As things turned out, life can be blessed, micro-surgery went well, recovery surprisingly fast.  Another reprieve and this old body’s back in good shape.  As for the carpentry those were just musings, I figure I could still put in a couple good weeks, if need be.  But the thought of regular week after week no way, not any more.  It would be stupid and self destructive to try pretending.  Fortunately, I’m not needing to go find that sort of work.  I have a nice low stress maintenance gig doing me just fine.

Then out of the blue a good buddy and occasional work partner back in the day, (who’s a couple decades younger), called me up and asked if I wanted to build some stairs for him.  He was busy framing the house and with his small crew he didn’t need the headache and he knew I can do a nice clean sturdy job.  It was another cosmic giggle.  Weeks earlier resigning myself to never again, now this opportunity!

Cool!  Still, it’s one thing remembering and writing about all I once built, it’s another standing in front of the materials.  Can you do it again old man?  Every new job is a new test.  How good are you?  Not yesterday, but today?

Better not screw up.  Can the old back deal with it?  Now there’s the belly demanding a bit of coddling.  But, hell a challenge is a challenge and I never could say no to good job offers.  I mean, if they think enough of me to offer me the job, I'll take it, do it, make them happy, makes me happy, and keep them coming back.  Enlightened self-interest and all that.

I’ll admit to a little apprehension.  That’s okay, I’ve found being a little scared is often a healthy thing, focuses one’s mind wonderfully.  In any event, by and by I did build those stairs.  A distracted silly 3/4” screw up in placing my upper ledger irritated me.  Still, I recognized it early and after a bit of self-flagellation, I figured out an easy fix, notching the top tread, so no harm done.  The stringers and stairs are correct and accurate.  As a boss of mine used to like saying, if you can fix it, it ain't a screw up.

As for the workmanship, such as the tight fitting angle-cut fire-blocking and structural elements, she’s a beaut.  I made the effort, exercised my skills and achieved the goal, and this time I have more than another memory, I have pictures too and given the smack being talked about me, I figure I'll share some over here.

(Take that you trash-talking know-nothings) 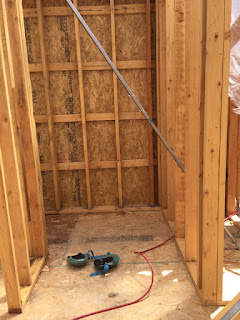 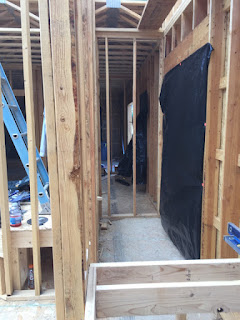 Landing and space where stairs are going. 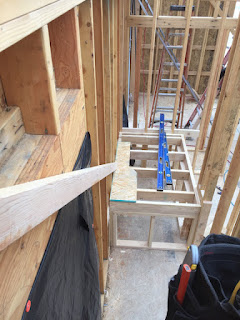 Spacer for stringers, to allow for future sheet rock and the tongue'n groove pine finish.
This area will be a utility room so impinging on the door is okay, i guess.
Architect's call not mine. 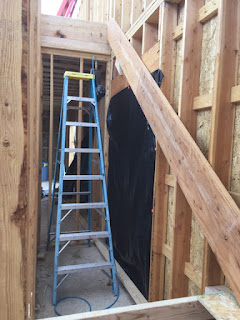 After I draw the layout on the first stringer, I cut the bottom and top, for a test fit. 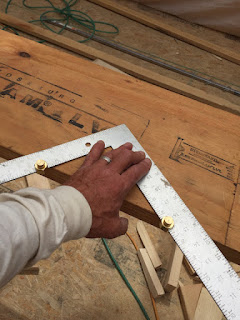 It's critical to get this step correct.  (The sharper the pencil the better your cuts). 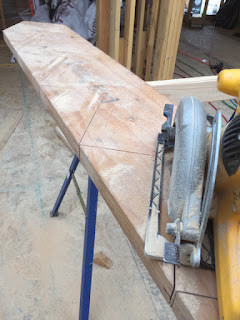 The next critical step, clean accurate cuts.
{Ironically, this is a bad cut, wide of the mark.
I like it because the reveal dramatizes the accuracy of the 90° angle.}
I did go back and shave off the excess.} 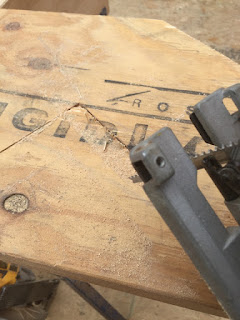 I use a jigsaw for a neat finish to my 'birds mouth' cut. 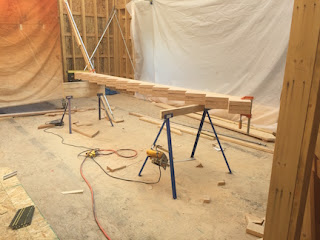 Double check consistency of stringers and make any necessary adjustments.
Building Code gives me ~3/8" allowable variance between steps,
contractor gave me ~1/16" standard with a challenging wink, I kept it damned near ~1/8". 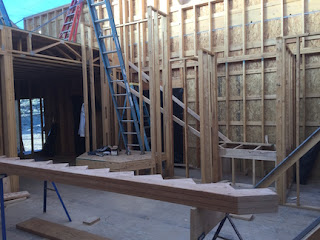 Note, the near spacer looks weird because it's laying there, not yet attached. 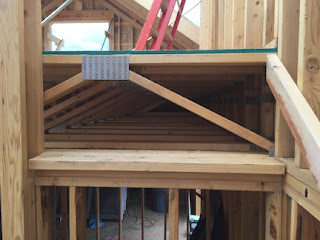 Top of stairs will terminate here. 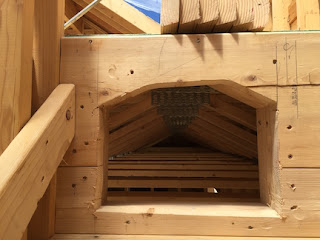 Installed header, plus cut out for future duct work.
Do it before the HVAC butchers come in and do it. Duct opening after installation of stringers. 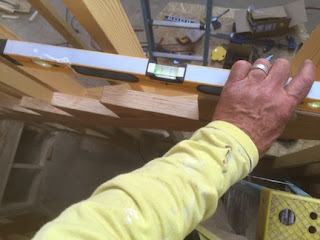 Final check on stringer before attaching.
{This is where a contrarian type could magnify and laugh and laugh
because the bubble isn't centered,
never appreciating or acknowledging that the camera is at an angle,
giving a false impression.  ;- ) } 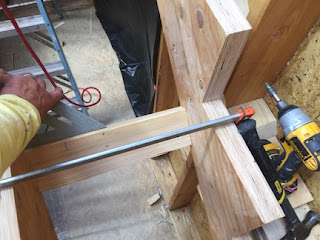 Blocking to help add extra strength, spaced to double as nailer for sheetrock. 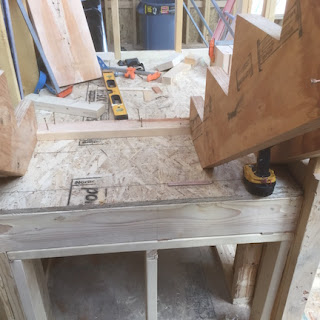 Center stringer gets notched, the 2x4 boot adds extra stability.
(Note structural screws lined up to penetrate joists.)
(Don't see it here, but eventually I took some stair cutouts and filled in under the stringers
flush with the framing - dimension of platform was given to me by contractor.)
{I also used a 2x12" fall-off to extend behind that middle stud,
for direct bearing under the middle stringer.} 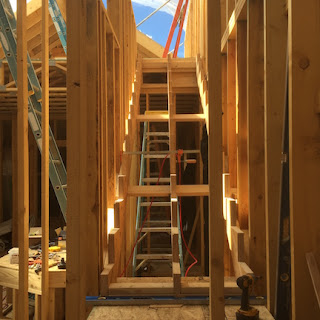 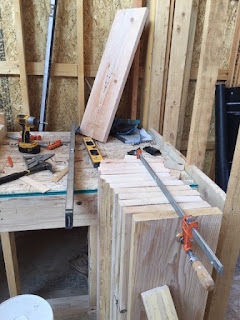 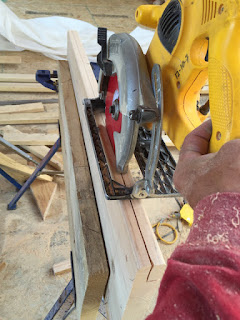 That top tread.
I swear by that DeWalt saw for nice accurate cutting.
In the day I would wear one out literally every year.
Then the bottom fell out in 2008 now given light duty this one is still around since Dec 2007.
(It's nylon/plastic gears which makes it relatively light -
just didn't hold up when being used hours on end, and in the heat.)
But, no other saw felt as good and accurate so it was worth it.
I also have a monster Milwaukee Worm Drive for the serious production cutting,
fortunately not much call for it these days.
Yup, talk about watching oneself age,
that Milwaukee beast was out front heralding my diminishing physical strength
a decade ago. 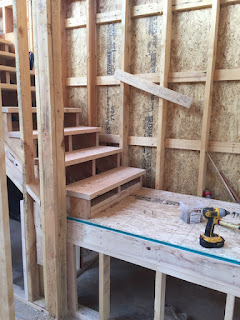 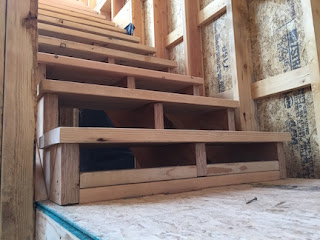 Detail, base of stairs. 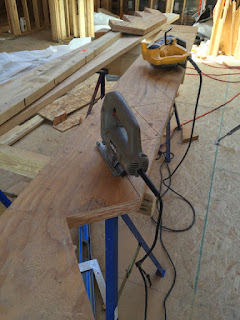 Cutting the stringers for the lower set of stairs. 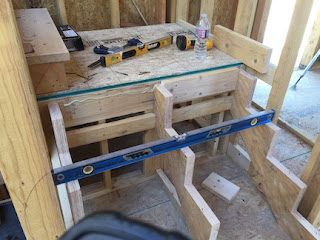 Installing stringers and blocking.
I added blocking at middle and again filled in under stringers with some cutouts,
also tossed in an upright at middle of center stringer for extra bearing, for the heck of it. 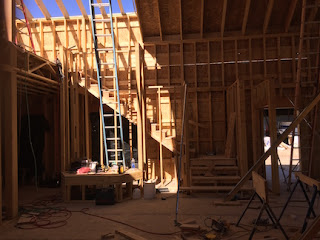 PS.
It's not the job you're doing that's important.

Posted by citizenschallenge at 10:05 PM