The trump firehose is too much to keep up with.  Once again all my fine plans for the morning were swept away when I got sidetracked by the multifaceted news regarding Cambridge Analytica (and here, and here, to mention but the most recent), because it turns out when I looked for supporting information I found years worth.  Since it’s been such a time consuming effort and since this really is important knowledge to possess, I been putting together a post to share the many sources I’ve gone through this morning and now this afternoon.

Then I came upon “A Special Relationship & the Birth of Cambridge Analytica" TEXTIFIRE that is so information packed that it took me nearly an hour and I’d be lying if I said I read every word, a close scanning says plenty enough, and I know the various links I looked into supported claims made.  I’m overwhelmed by all the information, I’ve decided this article deserves a stand alone post.

A Special Relationship & the Birth of Cambridge Analytica

Bridging the Atlantic to bring radical nativists of Trump & Brexit together via military tech & ad money, one donation or dataset at a time.

Steve Bannon-owned Cambridge Analytica LLC, a US subsidiary of UK defense contractor SCL Group, has been increasingly faulted for its dual role in both Donald Trump and Brexit’s victories. Its elevated & expensive role in the Trump digital marketing team’s self-proclaimed voter suppression rollout was the culmination of several years of preparation by military and anti-government interests on both sides of the Atlantic, as well as nationless finance & technology kingmakers seeking to enhance their own profit power.

As a direct result of the reporting led by the Observer’s Carole Cadwalladr, Cambridge Analytica is already under active investigation for violating United Kingdom data protection laws, as related to their involvement with Leave.EU.
It’s unclear if anything will come of this, as Leave’s ‘Bad Boys of Brexit’ seem quite confident they were able to skate through some loopholes and use some creative accounting to their advantage.

Separate issues have been under the microscope of UK authorities. For example, one is the improper collection & use of voters’ personal data via the internet for political marketing/advertising purposes, and another is the question of foreign (read: non-UK) money being used to fund the Leave campaigns. Cambridge Analytica is at the center of the data inquiry, and US-based stock trader Robert Mercer has been identified as the primary source of the foreign money, but in both cases political media production & dissemination is the underlying issue.

Our previous article looked at the undertold history of the nonprofit organization Citizens United regarding highly influential American political media & advertising from 1988 to 2011, and we’ll continue just prior to where we left off. …

Bannon & Bossie began releasing their political issue advocacy film collaborations in 2010, months after Bossie’s Citizens United v FEC case received its big Supreme Court victory, but they were among many looking to exploit the new election [de]regulations. One such up-and-coming major player was half-billionaire Robert Mercer. …

DeFazio’s 2010 reelection campaign was nearly derailed by the appearance of highly-funded ads which attacked him and supported his ‘Tea Party’ Republican opponent, Art Robinson. Created by a PAC calling itself Concerned Taxpayers of America (CTA), it had been an ongoing mystery at the time as to who put up the big money for that organization. Only a few weeks before the election, as per the then-newly lax criteria set forth by the Citizens United decision earlier that year, was it revealed that one of the only two funders was Mr Robert Mercer, who contributed $643,750. …

BREITBART OUT, BANNON & MERCER IN

Three years after meeting Steve Bannon in 2004 — at the Beverly Hills movie premiere of Bannon’s directorial debut In the Face of Evil: Reagan’s War in Word and Deed — Breitbart left The Drudge Report to start his own media outlet, Breitbart News, which he said was intended to be “unapologetically pro-freedom and pro-Israel.” Breitbart rapidly became the darling of the ultraconservatives and elbowed his way into mainstream relevance, becoming a driving force in the 2009–10 rise of the explicitly anti-Obama Tea Party. …

WEREN’T THE FIRST TEA PARTIERS ANGRY AT THE BRITS..?

Bannon became interested in United Kingdom politics in the early 2010s, seeing it as fertile ground for ideological manipulation. He began making friends with far right bloggers and politicians, particularly those tied in with Nigel Farage’s United Kingdom Independence Party (UKIP). A hard right party commonly disparaged as fascist, UKIP sought to restore what it saw as true conservatism. Bannon was greatly invested in the USA Tea Party ‘movement’ at the time, as evidenced by his movie productions and speaking engagements, so he viewed UKIP as a natural comrade in arms. …

In October 2012, a few months after the Bannon-driven deposit of Mercer Money toward new election management technology, a Strategic Communication Laboratories subsidiary named SCL Elections was registered in the UK. All company shares were initially owned by Alexander Nix, Director of SCL Group and public face of the conglomerate, but its first and current Managing Director is Mark Turnbull.  … 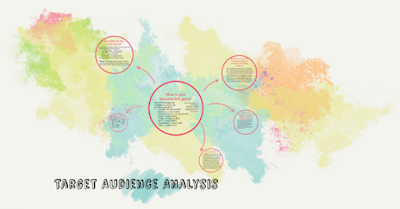 Also back in 2004 — the same year BPPA formed and their work began in Iraq — B-PC took on a contract to spin their web in Ukraine for Yulia Tymoshenko in the time of the Orange Revolution, which would have seen them working against Paul Manafort’s clients in the Party of Regions, as well as in the vicinity of fellow contractor SCL.
A previous article published by TEXTIFIRE explored SCL’s role in those events and the related history, which involves billionaires, rigged elections, the most glamorous Russian spy in history, and a mythical war room SCL billed as “The Most Powerful Weapon In The World.” … 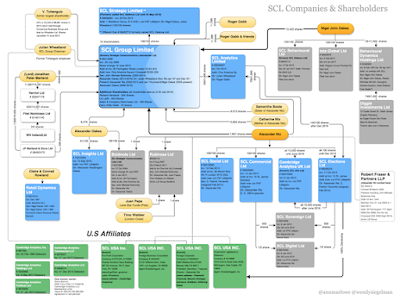 SEEKING A Ph.D. IN EXPLOITATIVE AD-TECH

Cambridge Analytica LLC — the US company which will henceforth be referred to as CA or CambAnal — has garnered a large amount of public interest over the last year and a half for its use of big data in elections, just like Rebekah Mercer wanted. The primary subject of that media attention has been debate over the controversial merits of CA’s claimed use of Five Factor Model or BIG5 personality profiling — aka OCEAN, an acronym derived from Openness, Conscientiousness, Extraversion, Agreeableness, and Neuroticism — with much less of a focus on either the sourcing of the identifying datapoints or the origination of the tools & methodology CA deployed.

A December 2016 article in Das Magazin — a sensation in Germany at the time, which spread virally upon its English translation published by VICE’s Motherboard in January — told a story relayed by Michal Kosinski, formerly Director of Operations for Cambridge University’s Psychometrics Centre and Leader of the e-Psychometrics Unit.  …

TAKING THE CAMBRIDGE OUT OF CAMBANAL

With fingers pointing at CambAnal and CambUni as a result of all the recent media coverage, blame has begun to be shifted around. School, tech company, and professors are all turning on each other. In an attempt to uncover their true relationships, data protection advocate and researcher Paul-Olivier Dehaye has filed a number of Freedom Of Information requests with Cambridge, but has thus far only received refusals; instead, the University has appeared to be attempting to distance itself from the research in question. Their stance seems to be that they have no claim to the data or results, that Michal Kosinski owns it all, and that Microsoft is solely responsible for its existence. … 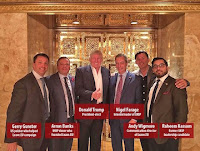 MR. MERCER GOES TO WASHINGTON
On 22 July 2014, the Permanent Subcommittee on Investigations, led by US Senators Carl Levin (D) and John McCain (R), held a hearing titled, “Abuse of Structured Financial Products: Misusing Basket Options to Avoid Taxes and Leverage Limits.” Called in to testify were six financial heavyweights: the Managing Director of Barclays, the CEO of Barclays Capital, a Managing Director and the President of Deutsche Bank Securities, and two executives from Renaissance Technologies.
After a 6-year investigation, …

CATCHING UP TO THE PRESENT TENSION
Steve Bannon — the current White House Chief Strategist who still attends National Security Council meetings — has owned at least a hefty chunk of Cambridge Analytica, the Facebook-powered, international military psyops-based, Mercer-funded, Microsoft-enabled, finance-loopholed, Amazon-trained, far-right-affiliated, foreign-born, algorithmic-advertising-driven media machine which participated in both the victorious Brexit and Donald Trump campaigns.
In fact, Bannon is the only publicly documented member/owner of Cambridge Analytica LLC to date. Every SCL subsidiary in the UK has reported their shareholders on a regular basis for public dissemination, as is the lawful standard, but similar information is generally not available in the US. As a result of Bannon’s required White House financial disclosures, however, we learned he owned between $1m-$5m in CambAnal, though in defiance of legality he had not sold it as of at least late April 2017. …

Stay tuned to TEXTIFIRE to catch up on the events of the last three years!

Posted by citizenschallenge at 2:58 PM