5/7 Taking umbrage at the abuse of our Free Speech Rights. The Jim Steele files.

The Situation:
The disconnected-from-physical-reality GOP attacks on climate science (a.i.) have reached horrifying levels with the Trump Administration.  Yet science loving rationalists, pluralists, progressives, liberals, Democrats still haven’t developed effective messaging for directly confronting the most childish of Republican arguments.  Why?  Seems to me, mainly because rationalists rather sidestep that Me First driven willful ignorance.  This acquiescence to nonsense has been a fatal error for the national dialogue.

Always remember the onlookers, and appreciate by making the effort to explain some of the science, you’re doing homework that invigorates your own understanding.  (continued at ...) 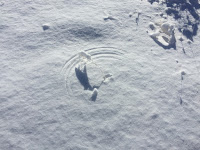 Back in January, my Four Corner Free Press column was built around a talk by climate scientist Dr. Trenberth, an authority on our planet’s global heat and moisture distribution engine. In March there was a Letter to the FCFP Editor offering an alternative.

The writer offhandedly dismissed the scientific “consensus” as though it were just another opinion, while lamenting the politicization of science (Apparently oblivious to the reality that his letter was nothing but a gross politicization).

Ironically to underscore his legitimacy the writer encouraged us to read Jim Steele’s “LandscapesAndCycles” collection for a second opinion. As it happens, I’ll bet there are few who have studied Steels’s collection more than I have and I welcome this challenge to write about it.

You see, from my first introduction it seemed to me that what Steele was doing was a perfect example of “malicious abuse of our free speech rights,” though I didn’t have the words for it then.

That started me on his trail.  I did a detailed review of Steele’s 2014 talk to the International Electrical and Electronic Engineers, I also transcribed his January 27, 2015 interview with Heartland’s Sterling Burnett in order to dissect his method. That one required fourteen topic-specific posts to do his torrent of misinformation justice.

All told, I have some fifty posts unraveling Jim Steele’s deceitfulness over at my ConfrontingScienceContrarians.blogspot.

In a nutshell, Jim Steele proposes that landscapes and natural cycles are more powerful drivers of global warming than our insulating atmosphere.

His intellectual underpinning is a self-certain, but never explained, rejection of CO2 science. He maintains it's a hoax with political underpinnings. This is something his Republican audiences want to hear, so he’s never asked to justify his super-natural assertion.

Steele has used his general environmental studies background to travel around the world learning about various wildlife studies with an eye towards finding errors to exploit. He learns about these errors and shortcomings from the wildlife scientists who were directly involved. Who willingly shared their challenges and learning curves.

Where Steele gets nasty is the way he slams these same individuals by portraying them as clueless shills. Where he gets bizarre is leaping from those shortcomings in wildlife studies to claiming they prove global warming is a hoax and that we shouldn’t worry about it. An astounding chain of illogic.

As for flaws and errors in wildlife studies, Steele keeps it a secret that none of it was a secret. It was part of the scientific community’s ongoing discussion and literature. It's the stuff of science marching forward, learning from mistakes as much as from successes. After all, wildlife studies over huge expanses of landscape are exceedingly difficult and running a perfect experiment is impossible.

Once I got into researching Steele's claims and contacting most of the scientists he singled out for derision I was shocked at how shabbily Steele treated their hospitality and the collegial support he was given for whatever research project he claimed to be doing.

I have put much effort into documenting Jim Steele's words and claims. I specify his errors, I point out his misrepresentations and then I provide the information he hides from his audience to support my claims.

I have invited Steele to debate many times.  He kept (keeps) running awayfrom my challenges, instead preferring the shelter and comfort of his Republican/libertarian echo-chamber, where he could lash out at me with unrestrained venom and irrationality.

As for scientific consensus, the Astrophysicist Ethan Siegel wrote an excellent inquiry, “What Does 'Scientific Consensus' Mean?” at forbes.com June 24, 2016 and I borrow his final paragraph:

“If you want to construct an accurate picture of what governs the Universe, you need to build on all that we’ve learned up to this point.

When we say “scientific consensus,” that’s what we’re talking about: things we’ve already learned, and the solid foundation for where we go from here. And if there really is a problem with the consensus, it’s going to be the internal community of experts within that sub-field that’s going to find it.

Believe me: as a scientist, there’s nothing we like more than learning something surprising and new.”

You see scientists are truly curious and skeptical, always looking for flaws that might hide new revelations. That’s a reason these people became scientists, the quest to be the first to understand something new. Fact is, that they simply don’t think like politicians, promotors or evangelicals, even if those people love projecting their own habits onto scientists.

Earlier Siegel explained that when scientists talk about “science being settled”, they aren’t talking about “scientific consensus” as the final answer, but rather as the starting point that everyone agrees on.

In closing, the letter’s complaint that “they don’t want debate” begs the question what kind of debate shall we have? Steele prefers the melodramatic political debate, where winning is everything while truth and learning becomes irrelevant.


I myself prefer the curiosity driven constructive debate. A scientific style debate where each side honestly represents their opponents position and the facts. Where both sides agree that a better understanding is the goal.

I’d love to have that debate, but where’s Jim Steele?
Posted by citizenschallenge at 9:33 PM