The Situation:
The disconnected-from-physical-reality GOP attacks on climate science (a.i.) have reached horrifying levels with the Trump Administration.  Yet science loving rationalists, pluralists, progressives, liberals, Democrats still haven’t developed effective messaging for directly confronting the most childish of Republican arguments.  Why?  Seems to me, mainly because rationalists rather sidestep that Me First driven willful ignorance.  This acquiescence to nonsense has been a fatal error for the national dialogue.

Engaging and arguing with contrarians should not be seen as an exercise in futility, they are teaching moments.  Air the false claim, explain why its wrong.  Dissect deceptions, expose them, how else can we break the power these childishly contrived memes have held over political action? (continued at ...)

I am an Earth Centrist.
https://confrontingsciencecontrarians.blogspot.com/2018/07/i-am-earth-centrist.html

I am an Earth Centrist !

Meaning that Earth and her physical processes and the pageant of her evolution are my touchstones.  Understanding evolution and the biosphere I'm part of and how we got here is the foundation of all my reality.

Something real and to be reckoned with, yet in the end, it's only our mindscapes at work.  While the real creation keeps on unfolding outside of our heads regardless and we're left to hang on for dear life. …

Knowledge of God is the ultimate in personal intimate relationship, your experience can not be transferred to, or replicated for, others.

Religions are human constructs for enabling people to reconcile themselves with the seasons and hardships of their lives and to enable human societies to function in a civil organized manner.

A God if there be one is All Things to All People, well beyond all human* understanding as the Holy Books warn us (* read petty, fearful, greedy, self-serving humans) individuals.

If you are fortunate enough to be touched by God, that is your gift alone, something for you in your unique life.  It is not a recipe for your neighbors or the world.

Science on the other hand is humanity’s recipe for learning about the physical world and its processes as honestly as possible.

Learning is the goal.

Fidelity to physical facts is the gold standard.

Informed constructive skepticism is the rule.

Mistakes are for learning.

Dishonest bluster and bullying is a crime. 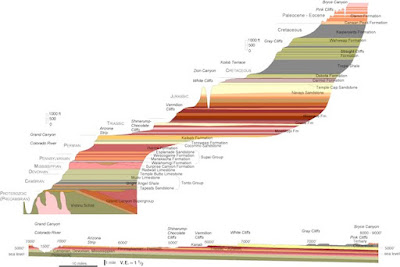 Recently, I was minding my own business listening to a fascinating talk on YouTube titled, “Rooted in Earth History: the Devonian transition to a forested planet.”  It was about strategies that Earth’s first ground-hugging plants adapted to escape the confines of Earth’s surface.  They did this in order to reach closer to our sun and further away from plant-eaters.

This led to Earth’s first forests, which in turn led to an explosion of new environmental niches for life to radiate into.

I learned some fascinating details regarding questions I’d been wondering about for a long time.  The lecture increased my understanding of evolution on this fantastic planet of ours, which has been a lifelong passion for me.

But my pleasant reverie was shattered by a YouTube comment that blind-sided me.  One ‘Psalm1Tree’ wrote in all seriousness:

Besides avoiding the topic of the video, the comment is such an ignorant statement on so many levels that most who know anything about geology and evolution would simply clamp on the head-vise and back away.

Unfortunately, decades of ignoring such belligerent ignorance about important aspects of our life and planet have led to its becoming so insidious and commonplace that our government is controlled by Republicans who disregard obvious physical realities on personal whim.   Justified only by a hubristic conceit that they are doing “God’s duty,” they are in fact all about pursuing their own EGO’s bidding.

I decided to engage Psalm with a short video that rationally explains what the geologic column is all about.  Then came my second shock. I was not prepared for the dozens of videos dedicated to childish denials of the "geologic column” that Google's YouTube search algorithm threw between my search topic and reliable serious information.

The handful of videos I sampled broke the first law of Constructive Debate: Honestly represent your opponents’ position!  Instead they painted a deliberately misleading cartoon, thus fabricating an easy target for battering to death.

Finally, my persistence brought me to a few serious videos by scientists who actually study these matters.  The difference in tone was refreshing. Rather than attacking conjured-up enemies, they focus on explaining their own work and results, often discussing competing theories to give as complete a picture as possible.  They even describe weaknesses in their own work and point out further questions needing clarification.

Why?  Well, that’s how science is done.  Everyone’s goal is learning, and fidelity to physical facts is the gold standard.

Science is a world where Free Speech doesn’t mean it’s okay to lie and slander with malicious intent.  Informed constructive skepticism is the rule.   Dishonest bluster and bullying is a crime.

Think about that. Psalm tells us one great period of time does not follow another.  How does that work?  Ignore the march of seasons? Ignore that plants and animals are formed, grow and die.  Ignore that floods, volcanoes, earthquakes, tsunamis are ever rearranging the surface?  Ignore that stuff piles up on top of what was laid down before?

Psalm also needs us to ignore that, in human terms, Earth is unimaginably old.  It’s as though Psalm has no conception of creation’s time-line ticking ever forward.  Years and millennia continue unfolding and it’s all happening one day at a time, piling on top of all the days that came before.

Or?  What’s the alternative, turning Earth’s creation into a one-dimensional cartoon?

As Psalm does when he tried to deceive me: “There never was a Geologic Column. That's a 19th century construct that has no data whatsoever to support it. Fossils are jumbled, in no organized pattern whatsoever.”

Here’s an example of self-certain, but grossly mistaken, beliefs enabled by utter disregard for substance.  A construct?  Sure, it is a construct.  So?  Why not ask, what is it a construct of?  What was it constructed for?  Why not a little curiosity and discussion about the substance of this “construct”?

No data for the Geologic Column?  Seriously?  Has Psalm ever looked?

It’s easy to track down when our understanding started, in the late 1700s.  That’s when a handful of curious, observant individuals struggled to make sense of what they saw laid out across their countryside.  In particular there was James Hutton the geologist, farmer, and canal builder who spent decades trying to understand the varied, sometimes bizarre rock exposures and landscapes throughout England and beyond.

Hutton was able to classify these exposures into specific rock types.  He also showed how at some time in the distant past hot lava had moved through what was then claimed to be the oldest rock type, deforming the land. Furthermore, this had to have happened at extreme depths, though now it lay at the surface.  Hutton’s work made it clear that Earth was unimaginably older than the good preacher Ussher’s self-certain 6,000-year assertion.

Another pioneer was William Smith, a colorful canal, railway and road surveyor; a mapper of coal mines; a man dedicated to comprehending the landscape and creating the first modern geologic map that visually distilled hundreds (soon to be thousands) of land surveys into a form all could learn to comprehend at a glance. 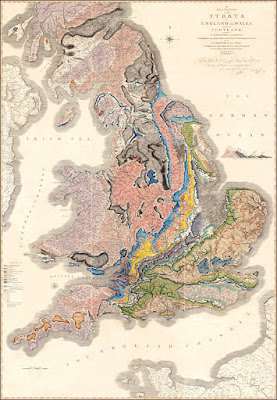 Getting back to the Geologic Column, think about Smith’s geologic map.  It only reflects what’s on the surface, but obviously there’s a great deal more underneath, as countless drill core samples attest.  Compiling that data inevitably leads to a geologic column, basically a vertical map of what’s under our feet.

How can that be a fiction when it IS totally data-driven from inception to finish?

In our few exchanges Psalm wasn’t interested in details and even less in doing any good-faith research on his own.  All he wanted was short answers to empty gotcha questions.

It’s unfortunate because I do have a wonderful image of our own Colorado Basin’s geologic column to share.  Along with a video where Wayne Ranney, its creator, explains all about the evidence and data that drove the creation of this geologic column.

Go to YouTube and search “Ancient Landscapes of the Colorado Plateau with Wayne Ranney” – you won’t be disappointed.  Then you too can look at the supporting evidence every time you drive through our Four Corners wonderland.

For supporting information, check out:

Psalm1Tree, no Geologic Column??? Have you met James Hutton?
https://confrontingsciencecontrarians.blogspot.com/2018/06/psalm1tree-no-geologiccolumn-say-what.html

Psalm1Tree, no Geologic Column??? Have you met William Smith?
https://confrontingsciencecontrarians.blogspot.com/2018/06/psalm1tree-no-geologiccolumn-say-what_17.html

Psalm1Tree, no Geologic Column??? Have you met Blakey or Ranney?
https://confrontingsciencecontrarians.blogspot.com/2018/06/psalm1tree-meet-ron-blakey-wayne-ranney.html


For the heck of it, here's the video I found so fascinating:

Posted by citizenschallenge at 10:07 PM