from: Jim Steele | to: Sherman Frederick, Editor of the Pacifica Tribune | cc: citizenschallenge
Feb 23, 2019, 7:20 PM
Re: Steele’s take on Carl Sagan & 97% Consensus claims - via Pacifica Tribune 2/20
"Sherm I am sorry that you will be hounded by Peter Miesler as he attempts to denigrate me and every skeptic.

Hmmm, ironic.
Look at what I received a few weeks  back. 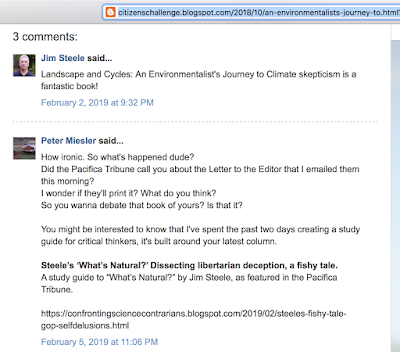 (After posting this I was surprised to see the date was before I’d written the
Pacifica Tribune for the first time.  But the bigger point, Jim’s easy with the fibs.)

Steele continues: "He is infamous on the internet for dishonest and relentless attacks.  He has hounded colleagues at SFSU and other experts who have supported my opinions.

In response to Mr. Steele’s email,

1¶   What is Jim saying?  That any critique of his words is an “attempt to denigrate (him) and every skeptic”?

¶ 2   I have a clear comment policy - rational and direct challenges to what I’ve written are welcome.  But, I will not become a billboard for garbage that totally sidesteps my dialogue.  This was clearly explained to Steele at the time.

Steele forgets to mention that he has a standing invitation to submit an on-point guest post at my blog, which I’ve promised to publish unedited, nor annotated.  Though I would certainly follow it with my own post examining his words.

¶3   You can read all about the SFSU incident, I was seeking accountability and a bit of protection insurance, (the guy can get scary).

¶4   Steele writes: “He is simply an obsessed internet sniper. Sniping at me somehow gives purpose to his wretched life,”  the same guy who writes:

3. Don't: Don't attack the arguer, attack the argument.
Steele comments: (mud-slinging dominates politics. Dismissing valid arguments by calling the arguer a (“internet sniper” or “wretched human”) muddies the science.)
Doesn’t that sounds like there’s a mighty totalitarian double standard in play here?  What’s happened in our country?  I thought in America we still believed in fair and open constructive debates, or what?  Oh, and what about simple honesty?
=====================================

Incidentally, this should be of interest:

With time to reflect, I'm confused by your display of moral outrage in that January 7th WUWT broadside? Come on, lighten up, you should recognized the Shakespearian overtones and appreciate we were made for each other.

Besides, it was you who jumped into my lil climate change sparing camp over at SkepticForum back last spring.... you were the big shot daring anyone to dispute your nonsense.  Did you really think I was going to allow your Republican/libertarian "hey no worries, it's all a hoax" challenge to go unanswered?  Then in your IEEE 'climate science horror' series and LandscapesAndCycle you're the one that told folks to check original sources.  Well, I have and I've received responses including many full texts of published studies from:
Dr. Ainley,
Dr. Breckner,
Dr. Fretwell,
Dr. Guillaume,
Dr. Jenouvrier,
Dr. Kaiser,
Dr. Kato,
Dr. La Rue,
Dr. Tate.}

Be happy!  Here we are, "Citizenschallenge" vs. "LandscapesAndCycles"

You the defending champ of "NoWorries - it's a hoax"
vs.
Me the advocate for "Learning about our
Global Heat and Moisture Distribution Engine"

I can understand that Jim Steele does not like me.  After all, I’m the one calling foul on his many deceptive claims, including his tendency to maliciously slander honorable accomplished professionals and establishment climate science in general.

Jim Steele gives lectures, writes books, now he has your weekly column, all calculated to spread misinformation and confusion - because unfortunately in America it’s become okay to lie about recognized physical facts.  And all of it very public.  He’s the one constantly demanding debate.

Mr. Steele calls what I’ve done internet sniping, now he’s crying, victim.
Shouldn’t an American citizen be allowed to confront someone for their demonstrable lies?  Or what?  In this new age of Trump, have all previous standards of civil public intercourse succumbed to self-certain absolutism?

I’m actually a nice guy, enjoying a good and satisfying life if you must know.  My mama raised me right, that is, to respect people and the creations of humanity, while not losing touch with this Mother Earth that supplies our life-support system.  The Earth that we were born out of, depend on, and then die back into.

All I want to do is debate the bankrupt talking points of climate science contrarians and “libertarians”.

All they can muster is calling me names and hiding.

I report, you decide.

Best wishes and looking forward to hearing from you.

{Fredrick’s response to me you ask?   Well seems the offended "libertarian" editor Fredrick has also run for cover and is himself running silent.  No surprise there.
The surprise is that so many rationalist and progressives and liberals and children of the intellectual enlightenment have allowed these people to get away with such juvenile bullying tactics and their truly childishly disjoined and profoundly dishonest storytelling.  Why is that?  That’s what I’m stuck trying to wrap my mind around these days.
But than, in Hollywood America who cares about honesty anymore?  Why care about substance and physical reality when ya got flashy facades, eh?


Such a tragic societal failure.  But, who cares when we can make the next generation pay for our All-American sense of self-entitled gluttony and our long parade of Me First self-destructive choices.}

We The People of the United States have a moral, ethical right - along with a pragmatic need - to learn what scientists have learned about this planet's biosphere and climate engine without constant dishonest crossfire.
We should not tolerate serious scientists constantly being drown out by amoral, ruthless and frankly ignorant arguments - that an astoundingly ruthless GOP PR factory repeats over and over again, without ever learning a damned thing from the evidence in front of us.

So there you have it.  This Jim Steele has mastered the Koch’s Tea Party Offensive.  Take any challenge as an assault on one’s person, respond with ruthless vigor.  Bully all the way.  Totally disregard for facts or adult conversation.

This is how the once Grand Ol Party got transformed into this Trumpian GOP bunch of absolutism, lead by a Russian Obligate President.

Basically Steele demands the right to spend years broadcasting utter malicious misinformation about serious competent professionals, and just as sinfully to lie about well understood and definable physical laws of nature that control the state of our life sustaining biosphere.

Jim flashes a great deal of self-certain superior contempt upon establishment climate science - and by virtue of his self-certain authority, no one is allowed to question the man.

Steele tries to portray me as some lunatic who’s obsessively hounding him.

Based on what?   My detailed reviews of his talking points and claims?  Why should he get a free pass?

Who in heck is Jim Steele to demand sanctity for maliciously misrepresenting scientists and their competent work?

This is how the extreme right wing has beaten the tar out of liberal, progressive, enlightened, rational principles and won the right to grievously vandalize our American Government under this president.

Why have we let them do it so easily and with such pathetic arguments as my dear pal Jim Steele constantly resorts to???

America needs a vigorous informed and engaged citizenry to stand up for honesty and enlightened thinking - or they will destroy us, listen to them, that sure is what they dream of and are so successfully accomplishing.

Since Steele brought up our past, I figure a stroll down memory lane is called for:

A virtual debate with Jim Steele based on his interview at Heartland Institute:

Regarding Mr. Steele, dishonest sniping and about as close was we got to a direct debate.

Yesterday I became aware of a shocking, misinformation laced at Anthony’s  "Watts Up With That" blog post written about me January 7th by our good Mr. Steele. ...

Friday, January 30, 2015
Mr. Jim Steele, Can you clarify your argument?
http://whatsupwiththatwatts.blogspot.com/2015/01/landscapesandcycles-clarify-your.html
A) That wildlife biologists working in extreme conditions and over continental landscapes make mistakes?

Recalling the early days with Mr. Jim Steele and pals.

CO2 Science: Pruitt, it's certain as certain gets! It's the physics! Don't you know???
https://confrontingsciencecontrarians.blogspot.com/2018/01/pruitt-agw-certain-as-certain-gets.html

Is Faith-based Thinking: God or EGO?

A list of appropriate descriptives for Jim's style and approach to discussing scientists and the work they've produced.

Calumny: the making of false and defamatory statements in order to damage someone's reputation; slander.

Malicious: Involving malice; characterized by wicked or mischievous motives or intentions. ~ An act done maliciously is one that is wrongful and performed willfully or intentionally, and without legal justification. (http://legal-dictionary.thefreedictionary.com/malicious)

Defamation (of character):
vilification = abusively disparaging speech or writing:
denigration = criticize unfairly; disparage:
obloquy = strong public criticism or verbal abuse:
traducement  =  speak badly of or tell lies about (someone) so as to damage their reputation.
scandalmongering = a person who stirs up public outrage toward someone or their actions by spreading rumors or malicious gossip.
character assassination

Posted by citizenschallenge at 11:44 PM