I've got this lit it up like a Christmas tree with hotlinks to a variety of relevant articles, videos and such.  All of it accessible to any interested person without much previous understanding, while offering some great information to the initiated as well. For a look at part one link here.

I'm happy to report I regrouped and revisited the challenge and after some more work, I  finished a version that I'm satisfied with and that comes in <1,000 words.  I'll be posting it early December 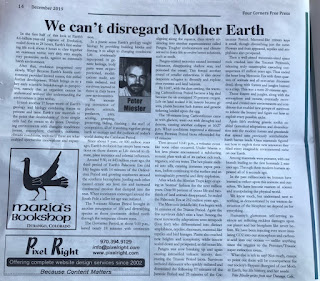 It took another 17 hours worth of Earth’s geology and biology combining forces to process and tame Earth’s raw materials to the point that descendants of those simple cells, which had been evolving new skills all along, had an environment with the proper conditions (ocean, atmosphere, chemistry, nutrients, climatic conditions, tectonics), to enable spectacular expansion and innovations.

Before continuing please reflect on a truth first recognized when studying the most primitive of life forms on Earth.  Spelled out by Nobel Laureate Peter Mitchell in 1957 it reads, “(We) cannot consider the organism without its environment - from a formal point of view the two may be regarded as equivalent phases between which dynamic contact is maintained by the membranes that separate and link them.”

That’s because the cell’s barrier skin is tailored to protect its innards from its particular environment, while allowing specific nutrients to flow in and waste to flow out. Life got more complex but these basic challenges remained.

Life learned to repurpose its genetic heritage, body parts were re-proportioned, modifications made, animals radiated, survivors learned to thrive in their brave new worlds. The increasing interaction of plants, animals, predators, pray, sensing, grasping, protecting, hiding, thinking - the stuff of competition. All of it worked together giving birth to ecology and the outlines of today’s world.

Some say since the Cambrian, Earth’s story has simply been variations on those themes as Life danced to climate and plate tectonics.

Now at around 9:30PM, or 443 million years ago, the third period of Earth’s Paleozoic (old life) Era begins, the Ordovician takes over. Continents dance around the southern hemisphere joisting each other and causing erratic sea level rise and increased continental erosion that's dumped into the seas. All worked together driving diversification as creatures needed to adapt or die.

Then continents settled in on the Gondwana supercontinent around the South Pole and another killer ice age, before they drifted north and back into warmer climates and the Silurian Period bringing another resurgence of Life and changing species. The Silurian ends in another minor extinction event as continents move nearer the equator.

Those who survived into the Devonian when continents alined with the equator where they faced tougher environments and unforgiving weather fluctuations, but also more opportunities to exploit with new inventions, such as seeds.

Now at about 10PM that is about 340 million years ago, another uptick in tectonics, volcanoes, degassing as continents start welding themselves onto the growing supercontinent Pangea with a single ocean covering ~3/4th of the Earth.

This forced another round of smaller extinctions and adaptations. It also encouraged some creatures to take their chances on land, or to swim up stream into rivers and adapt to fresh water.

Next the world woke to the warm Carboniferous Period. This period is a big deal because the air contained 35% oxygen. Life on land soaked it in, insects became giants, plants became lush forests and eggs were invented. The lush Carboniferous came in with glaciers and goes out with deserts and droughts and another collapse. Conditions improved and a slimmed down Permian Period biota rebounded. Then, a volcanic event like none other.

Under Siberia a hot lava plume encountered a subducting oceanic plate with all of its carbon rich rock, organics, and sea water. The hot plume melted into sills, creating immense vapor pressure, before continuing to the surface and an unimaginably powerful and dirty explosion. After which the Siberian Traps eruptions continued in normal fashion for the next million years. Over 90% of ocean Life and two-thirds of land animals disappeared. So ended the Paleozoic Era at about 10:41PM or 252 Million Years ago.

The Mesozoic (middle life) Era begins with the Triassic Period. Again the few survivors didn’t miss a beat. Life pulled out its genetic tool kit and started tinkering. Among the most noteworthy inventions were tetrapods (*) who differentiated into distinct reptiles, dinosaurs, mammal-like reptiles and bird lineages. Plants also reached new heights and complexity, insects scaled down and prospered, as did ocean Life.

Then with Pangea supercontinent breaking up, more volcanic activity and perhaps some meteors, and the Triassic biota was decimated. But, not dinosaurs who quickly radiated and dominated the Jurassic and Cretaceous Periods. Mammal-like critters kept it small, though diversifying just the same. Flowers and fruit appeared, reptiles and amphibians also prospered.

With renewed tectonic upheaval another minor extinction event marked the beginning of the Cretaceous Period during which dinosaurs evolved to their zenith. Then a well aimed mountain sized space rock crashed into the Yucatan Peninsula, releasing a 100 million megaton meteor and catastrophic cascading consequences.

Thus ended the hour long Mesozoic Era with three-quarters of animals and all non-avian dinosaurs dead, along with forests and jungles burned to a crisp, then we cross over into the 20 minutes of our modern Cenozoic (new life) Era.

Let’s reflect, it took Earth nearly 21 hours of effort to make complex creatures. Less than two hours to fill every nook and cranny Earth had to offer with ever more complex and competent animals creating ever richer biomes.   Folds within folds of harmonic cumulative complexity flowing down the cascade of time.

Only to have most all of it wiped out.  Then another recovery and Earth saw the one hour long age of reptiles and dinosaurs before that was wiped out a mere 20 minutes ago.

This allowed new groups of survivors, who with that genetic toolkit and evolutionary lessons learned, diversified into the modern forests and the first grasslands that extended Life's reach into previously uninhabitable harsh barren lands.  Once mammals figured out how to exploit these new environment they took the dominate position once held by dinosaurs.

Among them primates, with one branch leading to the first hominids 2 minutes ago.  Through them modern humans  appeared all of 6 seconds ago.

In the past millisecond we humans have learned to reflect upon this universe and ourselves.  We have become masters of science and manipulating the physical world.  We know much, but understand next to nothing, as demonstrated by our wanton impacts upon the biosphere we depend on for everything.

Humanity's gluttonous instincts are inflicting reckless damages upon our planet and her biosphere, like never before.  We have been injecting ever more insulating CO2 into our atmosphere and carbonic-acid into our oceans unlike anything since the triggers to the Permian/Triassic super extinction event.

What else is left to say?  Not much, except perhaps to point out there will be consequences for our society’s flippant disregard of our Mother Earth, her life history, and her needs.

Personal musings on learning and trying to write about it.  The above essay/column weighs in at 1142 words and I'm starting to like it.  This one has been a humbling experience.  I thought I had a pretty good conception of Evolution's many twists and turns, but every time I double checked my memory, I found new discoveries and layers of complexity, that put my previous understanding to shame.

It put me face to face with my limitations, yet again.  It also reminded me that an honest dedication to learning about our Earth is not always a pleasant thing.  In fact, one needs to be prepared to get their ego's pummeled from time to time.  Learning, writing is filled with sturm und drang, pride built up only to be torn down by unanticipated facts.  Sometimes the lights all shining on me, other times I can barely see.  But, we do learn and the fella that's walking away from this essay is way more in touch with Earth's fantastical story than the one going in, so that's made it a valuable exercise.

As for the Four Corners Free Press, I'm limited to a thousand words and I did manage to make my 20th deadline after weeks of thinking about it and an unprecedented nearly three day focused writing marathon.  Writing away, then going back and viciously cutting, then going back and starting all over again, all told I wrote around 5000 words as I plowed through the last, but needing to discard 4,000 of them.

When I finished, I sent it off and stepped away from the project, literally needing some recuperation time.  It was over a week before I sat down to look at it again and I was sorely disappointed, sloppy typos slipped through, some paragraphs were rocky, overall okay, but disappointing, a bit disjointed even.

I feel I've fixed that now, but at the price of 142 penalty words.

It's always fun waiting for the FCFP issue to arrive since we don't get any notice about the fate of our submissions.  I'm never guaranteed a spot, though I can only remember one time my submission didn't appear.  That is till a couple days back when this month's issue arrived.  Now I'm wondering how to trim this version without mangling it too much, 142 words.  Hmmm...


Pageant of Earth's Evolution (in 24hr) part one

Posted by citizenschallenge at 7:29 PM