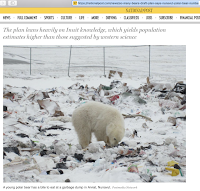 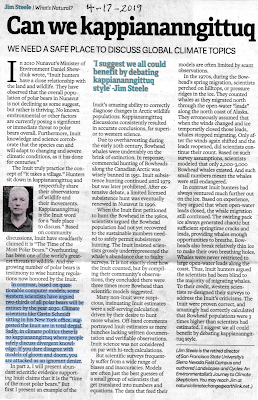 REPRINTED UNDER PROTECTION OF FAIR USE COPYRIGHT LAWS.
My intention is a review of 'libertarian' deception in action.
Click on image for better viewing and comparing.

Steele never explains that "safe space", instead he used his soapbox to praise Nunavut’s Inuit hunters for their superior wildlife observation skills that, according to Steele, put scientists to shame.
This column was so lacking in anything to do with climate science, that I have to change my approach again, this time simply dissect and comment.
The column’s title proclaims: “Can We Kappiananngittuq?” - subtitled, “We need a safe place to discuss global climate topics.” - and the center-piece quote reads: “I suggest we all could benefit by debating kappiananngittuq style.”
Begs the question, what would a public “safe space to discuss” climate science look like Jim?
What guidelines would you expect us to follow?
Would honesty be important?
When I’m discussing facts I’ve gathered, would there be an expectation that I be truthful?  That I honesty and accurately represent the information I’ve collected?
When I’m describing the data and work of an ‘opponent’ would there be an expectation that I honesty represent my adversary’s data?
Would it be a general betrayal to substitute a dishonest argument that prop up false assertions, while hiding my opponent’s facts?
In a kappiananngittuq, is there an expectation to respect the experience, knowledge and merits of each individual, even your opponents?
In a kappiananngittuq, if it’s explained to you, how you are mistaken about something, do you sit there striving to listen, understand and absorb the lesson?
In a kappiananngittuq, is learning and a better communal understanding of our collective real world situation the goal?
These are important questions.  I believe the answers are self evident: YES on all counts.  I wonder how Jim Steele would answer?
I believe,

The truth about polar bears
By Zac Unger  |  December 1, 2012
Depending on whom you ask, the North’s sentinel species is either on the edge of extinction or an environmental success story. An in-depth look at the complicated, contradictory and controversial science behind the sound bites.
https://www.canadiangeographic.ca/article/truth-about-polar-bears

“. . .  Despite all this hedging, the numbers still tell a powerful story. It’s just not always clear what that story is. In Davis Strait, between Greenland and Baffin Island, the polar bear population has grown from 900 animals in the late 1970s to around 2,100 today. In Foxe Basin — a portion of northern Hudson Bay — a population that was estimated to be 2,300 in the early 2000s now stands at 2,570. And in specific areas of western Hudson Bay, the most-studied, most-photographed group of bears on Earth seems to have been on a slow but steady increase since in the 1970s.
News like this leaves climate-change deniers crowing from the rooftops. But a closer look reveals that everything may not be quite so sunny. “Some populations appear to be doing OK now, but what’s frightening is what might happen in the very near future,” says wildlife biologist Lily Peacock, who has worked with polar bears for the Government of Nunavut and the U.S. Geological Survey. “All indications are that the future does not look bright.”
While population trends might appear stable, she says, “we’re picking up declines in body condition that are really frightening.” Scientists have shown a direct correlation between warm years and skinny bears. Even more distressing, one study predicted that 40 to 73 percent of pregnant females could fail to deliver healthy cubs if ice breakup happens one month earlier than in the 1990s. Polar bears are long-lived animals that reproduce slowly; counting the number of animals that are alive today might not paint an accurate picture.    . . .”

“… Changing environment
Warming temperatures are affecting the range of polar bear populations, shrinking their habitat and eventually, scientists fear, their numbers. While some northern bears may benefit from a more readily available diet, southern bears could find that food sources such as seal are more difficult to hunt and that human-bear encounters occur more frequently. Melting sea ice forces polar bears to fast for longer periods of time, impacting reproduction rates and the overall health of a population. Warming temperatures also increase human traffic, bringing pollution that impacts the health of both the bears and their prey.”
~~~~~~~~~~~~~~~~~~~~~~~~~~~~
Polar bears could be struggling to catch enough prey, study shows
Daisy Dunne  |  February 2018
https://www.carbonbrief.org/polar-bears-could-be-struggling-to-catch-enough-prey-study-shows
~~~~~~~~~~~~~~~~~~~~~~~~~~~~
High-energy, high-fat lifestyle challenges an Arctic apex predator, the polar bear
Science  02 Feb 2018:  Vol. 359, Issue 6375, pp. 568-572
https://science.sciencemag.org/content/359/6375/568
A demanding lifestyle
Polar bears appear to be well adapted to the extreme conditions of their Arctic habitat. Pagano et al., however, show that the energy balance in this harsh environment is narrower than we might expect (see the Perspective by Whiteman). They monitored the behavior and metabolic rates of nine free-ranging polar bears over 2 years.
They found that high energy demands required consumption of high-fat prey, such as seals, which are easy to come by on sea ice but nearly unavailable in ice-free conditions. Thus, as sea ice becomes increasingly short-lived annually, polar bears are likely to experience increasingly stressful conditions and higher mortality rates.
~~~~~~~~~~~~~~~~~~~~~~~~~~~~
Trends in body condition in polar bears (Ursus maritimus) from the Southern Hudson Bay subpopulation in relation to changes in sea ice
M.E. Obbard, M.R.L. Cattet, E.J. Howe, K.R. Middel, E.J. Newton, G.B. Kolenosky, K.F. Abraham, C.J. Greenwood
Published on the web 3 March 2016.
https://www.nrcresearchpress.com/doi/full/10.1139/as-2015-0027#.XOHS8S2ZNjt

“… We examined trends 1980–2012 in break-up and freeze-up dates within the entire SH management unit and within smaller coastal break-up and freeze-up zones. We examined trends in body condition for 900 bears captured during 1984–1986, 2000–2005, and 2007–2009 and hypothesised that body condition would be correlated with duration of sea ice. The ice-free season in SH increased by about 30 days from 1980 to 2012. Body condition declined in all age and sex classes, but the decline was less for cubs than for other social classes. If trends towards a longer ice-free season continue in the future, further declines in body condition and survival rates are likely, and ultimately declines in abundance will occur in the SH subpopulation.”
~~~~~~~~~~~~~~~~~~~~~~~~~~~~
One reason there’s an impression of more bears is that more ice melt forces them in land.

What polar bears in a Russian apartment block reveal about the climate crisis
Arctic bears are being driven off their normal migration routes and into human habitation. We should feel pity – and fear
Jonathan Watts  |  February 11, 2019
https://www.theguardian.com/environment/shortcuts/2019/feb/11/polar-bears-russian-apartment-block-climate-crisis
“… No other animal symbolises global warming like the polar bear. Over the past three decades, we have grown used to images of malnourished or solitary animals cast adrift on broken ice. But this time it’s different. There is a pack instead of a solitary beast, humanity is near rather than distant and the mood is not just of pity but fear – entirely fitting for a period in which the climate crisis suddenly feels as if it is upon us rather than a future threat.
It also highlights other problems of the Anthropocene – the name that scientists have given to our geological era, which is being shaped less and less by natural forces and more and more by human behaviour.
…”
also:
Russian islands declare emergency after mass invasion of polar bears
Experts deployed to remove dozens of hungry bears besieging Novaya Zemlya
Marc Bennetts in Moscow | February 11, 2019
~~~~~~~~~~~~~~~~~~~~~~~~~~~~
A Nunavut perspective: the state of polar bears in Canada
February 27, 2013 - by Joseph Cheek -
Interview with Marcus Dyck, a polar bear biologist working for the Government of Nunavut who resides in the Canadian Arctic community of Igloolik, Nunavut.
http://www.sciencepoles.org/interview/a-nunavut-perspective-the-state-of-polar-bears-in-canada
~~~~~~~~~~~~~~~~~~~~~~~~~~~~
It get’s complicated,
To kill a polar bear
The fate and ferocity of the North’s greatest predator has pitted the Inuit against southern scientists, leading to an extraordinary moment in a Nunavut court
By Aaron Hutchins
Published: April 15, 2019
https://www.macleans.ca/to-kill-polar-bear/

"There are no roads in or out of Naujaat. Some residents drive trucks around the Nunavut hamlet, located precisely on the Arctic Circle, but many prefer snowmobiles or ATVs and plenty more get around on foot. Pretty much everything in the town is within walking distance.
Look out toward the horizon from the edge of Naujaat, however, and it’s difﬁcult on a cloudy day to tell where the land ends and the sky begins. It’s a breathtaking landscape of endless ice, water and wilderness. Also danger.
It was about one hour before sunset on Sept. 8 when one local looked out toward the waters of Repulse Bay, at the northwestern edge of Hudson Bay. Almost immediately, anyone within earshot of a CB radio—most hunters keep theirs on all the time—heard the one word spoken aloud far too often as of late: Nanuk. Polar bear.
The animal was just a couple of hundred metres from town when another voice came over the airwaves, that of respected elder and once-active hunter Charlie Tinashlu: “Kill that polar bear before it gets too close,” he broadcast. “Kill it before it kills one of us—again.”
It had been only 10 days since Naujaat buried one of its own, …”
~~~~~~~~~~~~~~~~~~~~~~~~~~~~
FIND YOUR ADVENTURE - NUNAVUT TERRITORY POLAR BEAR HUNTING
Outfitter #062
“This outfitter is the longest operating outfitting company in Nunavut offering the very finest in polar bear, Greenland and Barren-Ground Muskox, Central Canada Barren-Ground and Arctic Islands Caribou, Barren-Ground Grizzly and Atlantic Walrus hunts. Actually, this outfitter has pioneered polar bear hunts in the high arctic since 1981, and has maintained virtually 100% hunting success rate for the Resolute area.
Hunting is done from camps situated in prime areas that may be up to 100 miles from the village of Resolute. …
~~~~~~~~~~~~~~~~~~~~~~~~~~~

Posted by citizenschallenge at 10:56 PM