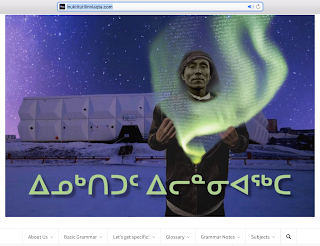 In reading through Steele's followup column about Polar Bears in a warming world, I became curious and decided to look up the word Kappiananngittuq, so I googled _Inuit Kappiananngittuq_.  I was blindsided by the four pages worth of google search results to forty articles that upon closer examination turned out to include 29 that mirrored the same deceptive Steele article.  What is going on?  Is Steele and Sherman Frederick and Anthony Watts mainlined into a social media troll factory or something?
Never mind, those questions will have to wait for another post.  Here I want to share the results of my search to learn about “Kappiananngittuq.”
After I recovered my bearing and turned to the remaining eleven links, I found what I was looking for http://inuktitutilinniaqta.com - it seemed to me an authoritative source for Inuit language.  To my confusion I found “Kappiananngittuq" actually translates to “It’s not scary.” 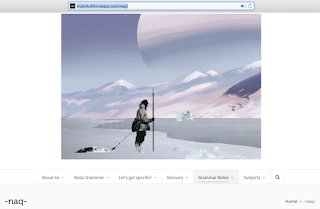 
Inuktitut Ilinniaqta is a community-led Inuktitut learning resource intended to support students in Qikiqtaaluk region. Our content is created by a small group of volunteers who are passionate about Inuktitut preservation and revitalization. Our goal is simple: to make learning Inuktitut a fun part of everyday life by connecting art, language and humour.

The infix –naq– is another simple but important piece of Inuktitut grammar to understand. It is used to express causation. Consider a few examples…

Oh dear, I though, what’s Jim up to this time?  Looking further I found a perfect guide to help me get an outline of fundamental Inuit beliefs including their approach to education and learning.
Something that seems to me central and missing from our public climate change debate, which should have been a constructive public education and awareness effort.  That’s why I’m sharing some it.

Pilimmaksarniq
The concept of skills and knowledge acquisition

Qanuqtuurunnarnig
The concept of being resourceful to solve problems

Aajiqatigiingnig
The concept of consensus decision-making

Pijitsirniq
The concept of serving

Information from Elders on stages of learning has been aligned with current educational theory to define the following five stages. In any learning situation, learners will be working at several different stages depending on the topic or project and their personal strengths and interests. However, these five transition points are like snapshots of the profile of the learner’s path along the Learning Continuum. Stages include:

3) The Communicative Learner
Tukisinaqsiliqtuq - ”beginning to make sense to others”

4) The Confident Learner
Pinasugunnaqsijuq - “is now able to experiment”

5) The Proficient Learner
Pijunnaqsijuq - “is not capable” 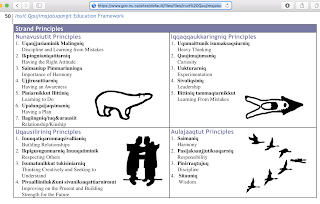 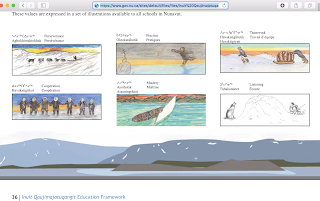 ISBN 1-55015-031-5
Published by the Nunavut Department of Education, Curriculum and School Services Division
All rights reserved. The use of any part of this publication reproduced, transmitted in any form or by any means, electronic, mechanical, photocopying, recording, or otherwise, or stored in a retrieval system, without written consent of the publisher, is an infringement of copyright law.
© 2007 Nunavut Department of Education

From there some more internet trawling brought me to: 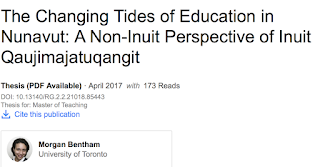 The Changing Tides of Education in Nunavut: A Non-Inuit Perspective of Inuit Qaujimajatuqangit
Morgan Bentham, University of Toronto

Morgan Benthan completed the picture for me.  {Or not!}  I’m sharing the following because, who knows, perhaps the Inuit culture may interest you - besides I believe their story is worth more than merely being a gratuitous name-dropping prop, for a fundamentally misleading series of articles that special interests are astro-turfing for Mr. Steele.

{ 5/30/2019 - I have just finished a phone conversation with a gentleman from Nunavut who responded to one of my emails.  He justified my early confusion by explaining that after reading Steele's article he felt "Kappiananngittuq" was taken out of context and in a way he's never heard it used in his forty years.  He reaffirmed it has to do 'not being scared'.  So the mystery returns, time for some more digging.

It seems to me perhaps this paper by Morgan Bentham may be at the root of Steele's misunderstanding.  Hopefully I'll be able to a better job of completing this story in the next few days. } 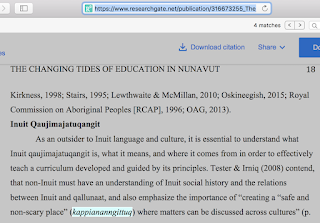 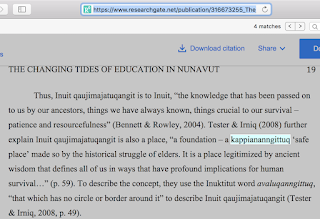 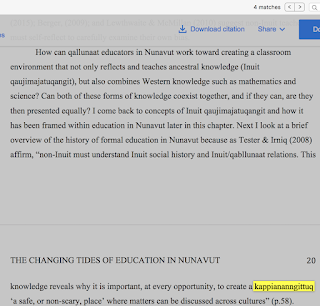 
The Inuit are native peoples who have lived in the Canadian Arctic and Greenland for thousands of years, and since 1999 in the autonomous territory called Nunavut. They have both a physical and a spiritual relationship with the environment, and this relationship is embodied in their traditional practices of hunting and seasonal migration and in the ways in which they make use of all aspects of their environment, including all of its life forms. In Inuit society, animals hold a central role: not only do they share the land on which the Inuit live and serve as the traditional food source; they are also present in every sphere of Inuit culture, including religion, healing, and art.
The Inuit draw inspiration from …

Posted by citizenschallenge at 8:44 PM