Dr. Robert Holmes aka 1000Frolly why are you threatening me?

Though I was given the tip years ago, it wasn't until this morning that I'm able to confirm that the prodigious YouTube liar and AGW science slandering 1000Frolly is in fact one Dr. Robert Ian Holmes from Australia.  (not to be mistaken with Hulme!)

A 'scientist' with rather tarnished credentials thanks to his efforts to convince folks that CO2 science is mistaken.  Writing that's so disconnected, even climate science contrarians dismiss him.

Welcome to the Age of Trumpkins - where truth is despised and bullying is everything.  This is what decades of liberal intellectual complacency has achieved for our complex global society.

Right now I really need to focus on a more important writing project, so can’t let this sidetrack me more than it already has.  Besides it would be good to let this steep awhile, since I have a number of responses and questions for this Dr. Robert Ian Holmes, whom I actually had not had time for in years, but who seems scintillatingly upset at a couple confusing comments Bob Trenwith recently dropped at WUWTW.

“Inciting mob violence”?  Seriously Dr Holmes?  What are you talking about?  Please.  Or are we simply dealing with another frantic drama queen, . . . or what?  Can you explain yourself?

For now I'm going to settle for a trip down memory lane and a look at my tenuous involvement in this Dr. Holmes/1000frolly/Monckton distraction.

December 23, 2015
1000frolly and how the science denying PR machine operates

Everything from "The rise of eco terrorism" - "our last year of freedom?" - to "human CO2 emission are wholly beneficial" - to claiming the scientific understanding of greenhouse gases is a big hoax, of course, ignoring all the modern marvels that demand and in their own way prove that thorough understanding!

His videos exude such a contempt for Earth's physical being and processes - along with hostility and a contrived paranoid attitude towards their 'opponents' and the established scientific community at large, that I've been increasingly curious about who's behind this YouTube Channel.

Today I came across an indication that this 1000frolly might be the infamous  Lord  Monckton himself.  This piqued my interest since I've had a few go-arounds with both 1000frolly and the Lord himself, whom I'll admit I studied closely for a while and am in awe of, as a political performer that is.  Unfortunately, the substance of his rhetoric is loaded with malicious fraud.

Trying to solve the mystery I visited two of his YouTube vids and asked him straight out if he was Lord Monckton, so far no response. (1000frolly has responded with the highbrow: "Sorry; I only answer scientific questions.﻿")  Later while trying to track down more information I came across this excellent exposition on one particular chapter in the War on Science which did such a good job of detailing the networks and connection at work, including Monckton and 1000frolly, that I thought it should be added to my collection.  Regarding the mystery of who's behind 1000frolly if anyone out there has any information please do share.

Now I will hand it over to John Mashey who has done some detailed research into the ways and means of the climate science contrarian PR campaign again people's right to learn about serious climate science and their one and only planet. 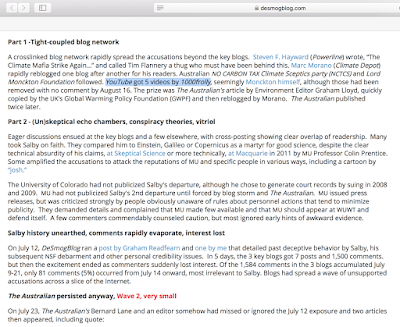 Bob Trenwith said...
You might be interested to know that I have discovered the identity of 1000frolly. His name is Robert Holmes. He lives in Victoria Australia, and he originally comes from Park Grove, York, UK. He owns/owned "Talbot Observatory", and this photo shows him standing in the theatrette of the observatory:
http://www.talbotobservatory.com.au/gallery5.html
This is his LinkedIn profile:
https://au.linkedin.com/in/robert-holmes-5198698a
August 25, 2016 at 7:57 AM

My email to Robert did receive a reaction, one couldn't call it a response, a reaction that opened up whole new can of worms.

Angry and aggressive, defending himself from imagined persecution, blindsiding me with a number of passionate issues,
I mean the man no malice.

I asked one simple question and was hoping for one simple honest response.
He never did answer that question. I was expecting a simple "NO, are you joking!"

My confusion is when I look at what there is about the Talbot Observatory, it's a wonderful project.
If R is responsible for building that and putting together those educational programs - I bow down to the man.
That is one beautiful effort of passion, and I am deeply impressed, even before seeing the inside.

But I don't know anything about it beyond what their local chamber of commerce shares on the internet and in a response to an email from me. Nor do I presume to, that's why I ask.

Bob, it would be cool to email with you* - 1000frolly is a malicious fraud who deserved to be taken to account for all the lies and deception he spews from his YouTube propaganda channel. Over a 130 video dedicated to stupefying gullible people.

I am absolutely not into harassing an innocent man, still that response makes me curious to learn more.
I sent R another email yesterday - Now I run off to work and to dealing with more productive and enjoyable challenges.

Peter Miesler said (to Bob Trenwith) …
Don't understand what you mean. I've done nothing. You've offered me no backing to support claims re Frolly1000 identity.
No one else seems to give a damn and the slaughter of the innocents (more like deliberately ignorant and hollywood disconnected from reality) continues. I'm open to suggestions.

It takes an informed proactive-team, a community and progressive rationalists still haven't seemed to figure that out.

I doing the best I can with what I have, keep hoping to connect with people but there doesn't seem to be anybody out there, so now I simply cope and enjoy what I have.

Jim Steele makes a much better abject lesson, for whoever might be interested in understanding the nuts and bolts of the "libertarian" con job being perpetrated against a lazy apathetic complicit public.
March 29, 2019 at 9:19 AM

Peter Miesler said...
Oh rereading Bob's query another couple times, let me give my response another try.
My previous question was a basically "okay what am I supposed to do with this" -

That was meant as in "what good is this link?" -
"What am I supposed to be thinking about it?" -
"What information is it offering?" and
"Why should I be looking at it"
"What should I do with this information being shared?"

There’s more, all rather confusing and unresolved and now our Dr. Holmes jumps right into the middle of it.  That a boy, fuel on a smoldering heap.

Just sharing cause that’s what I do, and I think people should care about the deliberate malicious public media fraud being perpetrated against the climate science community and the knowledge they have striven to accumulate and share.

Why it matters?  Funny you should ask.

We The People of the United States have a moral, ethical right - along with a pragmatic need - to learn what scientists have learned about this planet's biosphere and climate engine without constant dishonest crossfire.
We should not tolerate serious scientists always being drown out by amoral, ruthless and frankly ignorant arguments - that an astoundingly ruthless GOP PR factory repeats over and over again, without ever learning a damned thing from the evidence in front of us.

There's a character out there in YouTube land who's been pumping out incredibly deceitful videos at a prodigious rate.  Rumor has it, it's none other than Lord Monckton.  When I asked him directly he was very coy about it.  I would expect no less from one of the world's foremost political entertainers.  I'd already had a couple comment go-around with 1000frolly, and I have an acquaintance with the Lord going back five years now, so I wasn't surprised that he (er… 1000frolly) has chosen to "Ghost" me at the 1000frolly YouTube channel.

This from men who self-righteously demand that serious full-time working professionals stop everything to run off for a kangaroo debate with self-certain dabblers.  Interestingly, these same people never stand up to a constructive debate themselves?  Nor do they ever learn from information that's been shared?

To underscore the disingenuous nature of their challenge, they refuse to follow through on serious fact based rational debates that they are challenged with, instead opting to remain within their echo-chamber.

One tactic is "Ghosting" - challenging commenters on one's YouTube channel.
How "Ghosting" works is that a targeted individual can see his/her own comments when logged in, making it appear that your comments are a part of the discussion.  However, if you log out of your account and return to the same video you will see that your comment has disappeared, for example: …

…   What's tragic is how few students who know better are offended enough to stand up and add their own thoughtful correcting comments to such maliciously misleading videos or internet articles and such. - Why not make the effort to point out the many deceitful tricks being employed, then offering up real world information so at least people are aware that real evidence is out there.

Below I address this video's fundamental claim with a series of links and quotes that explain why the Ted Cruzs, 1000frollys, Lord Moncktons are so terribly wrong when they insist there's been no warming on this planet for the past 18 years.  Also about the satellite temperature record, which is not the holy grail some claim…

Anyone out there know about the Dr. Robert Holmes, Lord Monckton, 1000frolly connection?  Please do share.
Posted by citizenschallenge at 11:11 AM