What about Intelligent Design and Evolution?

Within science respecting Evolution discussions the monster in the closet that's rarely mentioned is Intelligent Design - and when it is, it's immediately beaten right back into the closet.  Why?  What do scientists have to fear?  Don't we have a rational "Intelligent Design" to point to?  Namely Mathematics!  Why not confront the faith-shackled with that reality?

First a little background, I'm a participant at the Center for Inquiry Forum, we don't have enough participants, but at least I can relate to those folks and for the most part we have some good dialogues.  As for the faith-shackled who drop in to troll and ridicule, they tend to be interesting in a challenging sort of way.  After all, what's a debate without an opponent?
In fact, it was debating just such a deaf faith-shackled character going by "Sherlock Holmes," that kick started these past months of focus on Earth's Evolution here at Confronting Science Contrarans blogspot.
He goes on and on about the necessity of Intelligent Design, but refuses to explain what he thinks it is.  So he's left it for me to try and make sense of it - and I believe I have.  Allow me to share some thoughts I've posted over at CFI today:

I’m starting this thread in reaction to a silly who’s trying to explain that the Cambrian "explosion" was physically impossible and required the 'outside tinkering’ of his God.

For starters the Faith-shackled depend on deliberately false self-certain assertions, among them:

All Cambrian biological diversification occurred over an exceedingly short time.

That there is no evidence of diversification earlier in time.

That it's physically impossible for these changes and developments to have happened.

I want to add that only through understanding the natural physical building blocks that Earth spent billions of years refining and rearranging can we appreciate what those building blocks helped create.

Also, that only through understanding their environments and how those have changed through time, can we appreciate why a species is what it is, diversifies, or dies out.

Within science respecting discussions regarding Evolution, seems to me the monster in the closet that's rarely mentioned is Intelligent Design - and when it is, it's beaten right back into the closet.

I believe it would be valuable for scientists to acknowledge our humanity and our mind's constant curiosity about our 'origin' and the ‘why' question.

I’m pretty sure all of us possess little voices in our heads constantly prattling on about the world it’s experiencing - even if that world doesn’t get beyond Reality TV and shopping programs, or Bible stories.

When seriously learning about Evolution, particularly lay-people with no formal or deeper understanding of the ways of science, its natural for the incredible details to overload our mind and simply overwhelm.

The impression of a grand directed pageant is staring us in the face and its utterly magnificent - that is where the Intelligent Designer comes into play - like an automatic safety valve.  Why?  Because it helps our minds process the truly mind-boggling information we are constantly hit with when studying evolution, or biology at the molecular level.

I believe that needs to be acknowledged.

Besides, what does science have to fear, it already has an Intelligent Designer at hand, MATHEMATICS.

Another matter, Creationists make much of "randomness" - yet as we learn more and grow, it becomes ever clearer that "Randomness" doesn't exist in our natural universe.  There are constraints that begin with the Big Bang and are further amplified through biology and evolution.

Why not celebrate that?

They say people need stories and myths to make sense of the world around them - why not supply some fact based stories, that are so much more satisfying than myths, because they enable a life time of nonstop learning and personal discovering regarding the existence behind us.

What does the Christian offer?  A demand for obedience and constant obsessive worshipping?  Seriously, what else do the loud mouth phony Christians offer?

Me, I have the wonder of a speck of dust that wanted to be more and an inspired life time worth of discovery and deeping appreciation that I belong to this world and to this time with a visceral awareness that vapid preachers of self-delusion can't touch.

I also have a worm that simply wanted to live and have babies, but oh the places her babies would go:

How do we get from a simple worm to all this complexity?

NOVA The Great Math Mystery - The Language Of The Universe 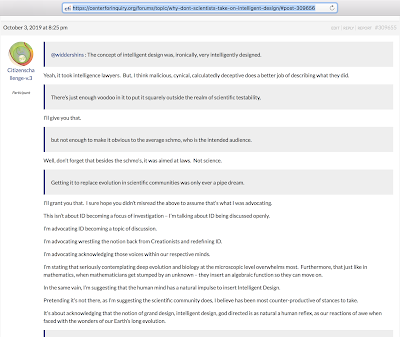 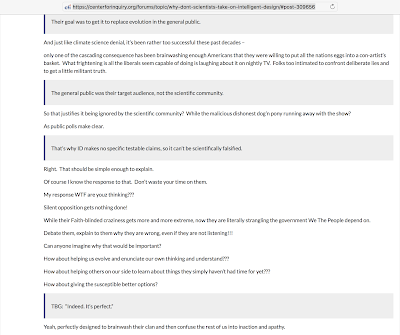 Posted by citizenschallenge at 9:13 PM