Here's my second Pageant of Evolution column, of course as I've said before I never finish projects I simply meet deadlines.  So it is that the version I'm sharing has gone through some more edits since the one that appeared at the Four Corners Free Press.  I'll be following this post with more highlighted video lectures by real sciences who will supply real substance behind this enthusiast's overview of Earth's magnificent Evolution. 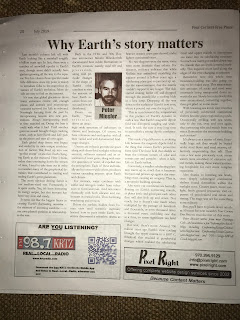 Last month’s Four Corners Free Press column left off with Earth looking like a snowball roughly seven hundred million years ago.  In fact, there were a number of snowball epochs in Earth’s past, though most didn’t actually have glaciers growing all the way to the equator.  For this column those specifics make little difference since my point is mainly to introduce folks to the marvelous dynamics of Earth’s Evolution.  More exacting details are easy to find on the internet.

It’s true that global glaciation played a role in Earth’s first extinction events, still enough plants and animals and microscopic creatures survived for Life to rebound.  Seemingly learning from the past by incorporating lessons into new generations.  Always reinvigorating itself as time marched on.  Doing the best it could with what it had.  Until another grievous assault brought things crashing down, only to have Earth and Life pick up the pieces and start all over again.

Each global deep freeze was begun and ended by its own unique combination of factors that lined up into one “perfect storm” or another.  Each changing Earth as she matured.  Here I think, rather than continuing down the stream of time, I need to spend more time considering some of the major geophysical dynamics which pushed both climate and life towards new realms as time passed.

The most obvious driving factor is our Sun.  Fortunately, our medium sized sun is quite stable.  Yes, it's been increasing its energy output, but that increase has been extremely slow and steady.

It turns out that the biggest factor in causing Earth’s fluctuating ‘insolation’ - the measure of incoming sunshine - is our own planet’s position in relationship to the Sun.

Back in the 1930s and 40s Russian astronomer Milutin Milankovitch documented how subtle fluctuations in Earth’s rotation, namely axial tilt and precession, along with the shape of Earth’s orbit, combine to vary the amount of heat Earth receives from our Sun and how it’s distributed.

Down on Earth “Plate Tectonics” drives an amazingly wide spectrum of influences on climate, landscape, and life.  All worth being aware of.  Of course, we have volcanoes and earthquakes with all their varied and well documented landscape changes.

Unseen are volcanic greenhouse gases along with short lived sunlight reflecting aerosols, sulfurous material and an assortment of toxic gases, along with massive quantities of water, all expelled into the atmosphere.  Each of these individually and in concert produces various cascading impacts upon Earth and climate.

For instance, water combines with sulfur and nitrogen oxides from volcanoes to form acid rain.  Acid rain reacts chemically with both silicates and carbonates in crustal rocks.  Thus hastening weathering and erosion and perhaps even some mineral evolution early on. In fact, it seems that very early on, it’s volcanoes that produced Earth’s ocean water!

Below the surface hidden from human view, until scientific ingenuity learned how to peer inside Earth, scientists discovered a relentless drama as heavier oceanic crust gets shoved under lighter continental crust.

No two chapters were the same, some were more dramatic than others.  For instance, evidence indicates that while Rodinia was assembled, straddling the equator around a billion years ago, a subducting plate got so jammed up under the supercontinent, that the mantle couldn’t support it any longer.  The slab started sinking, broke off and dropped through the mantle like a cooling blob in a Lava Lamp.

Dropping all the way through the mantle to the surface of the planet’s iron core, where it poured out over the top of it.  This in turn lowered the temperature in this portion of Earth’s dynamo in such a way that Earth’s magnetic dipole field was disrupted, tangling and weakened.  It took the core a very long time to reestablish a strong dipole configuration.

This made a big difference to evolving Life because the magnetic dipole field is the thing that creates Earth’s protective force field.  The force field that shields us from the constant stream of solar and cosmic rays and particles - when it fails, Life on Earth suffers.

Conversely, a smaller subducting plate may warm up so much that it becomes buoyant and presses up against the overlying crust, causing an orogeny.  That is, a mountain building episode.

Also since our continents are basically floating on Earth’s convecting mantle, as plates jostle and grind past each other they will also bob up and down.  Not much, but it doesn’t take much when multiplied by the passage of hundreds and thousands, sometimes tens of thousands of years, unfolding one day at a time, to cause significant sea level changes.

But wait, there’s more.  Around 700 million years ago Earth’s slow cooling brought the upper mantle to a 650°C threshold that resulted in geophysical changes which enabled the crust and upper mantle to incorporate sea water into its subducting structure.  So much sea water got sucked down into the mantle, that sea levels lowered markedly.

Remember, all the while mountain building was also going, only to be eroded away.  This meant massive amounts of rocks and sand were constantly being transported down towards the sea.   Slowly, but relentlessly this mass accumulated, cementing together, then getting piled on some more.

With lowering sea levels vast stretches of previously submersed continental shelves became giant evaporation ponds. Occasionally refilling with sea water, only to dry out, over and over again, thus extracting salts and metals from sea water.  It also seems logical to assume that some of the previous seafloor life managed to adapt to conditions on land.

Remember the mountain building and erosion?  It’s always just a matter of time.  Eventually huge salt flats would be buried under mud flows and sand storms, effectively sequestering that salt.  Thus over many eons previously toxic ocean waters were scrubbed of excessive salt and metals, making those waters increasingly hospitable for ever more complex organisms.

In truth, I'm not happy with this one, my beginning is too awkward, I'm scrambling.  Still it's a learning curve and has its value.  The third one I feel much better about, but I want to share some videos first.  The fourth one, is still forming and next couple weeks don't look good for that project, so we'll see how it goes.

Posted by citizenschallenge at 10:49 PM