If you enjoyed Robert Hazen and Jack Szostak, then you’ll want to add Michael Russell since his talks compliments what Dr. Szostak was explaining.  Of course, what you get out of these lectures is proportional to how well you already know the topic.  That said, any intelligent curious person can still get plenty of fascinating insights and better appreciation for the complexities scientists have come to understand by listening and then doing a little side research for themselves.  It's not like the fundamentals themselves are that difficult, it is the details that get impossibly complex and difficult to grasp.

The key is an honest curiosity to become aware of the world we live in.

With that I present another another couple lectures about the physics of Life’s folds within folds of cumulative harmonic complexity flowing down the cascade of time.  Before getting to my next essay.


Michael Russell: On the Emergence of Life Through "Negative" Entropy Trapping
https://www.youtube.com/watch?v=SF2uj0Oxqhg
MoleCluesTV,  Published on Mar 26, 2014

Dr Michael Russel's lecture at the Molecular Frontiers Symposium at the Royal Swedish Academy of Sciences in Stockholm, Sweden, May 2011. The topic of the symposium was "Origin of Life and Molecular Evolution". Check our YouTube channel for more exciting science videos! For more information, visit www.molecularfrontiers.org 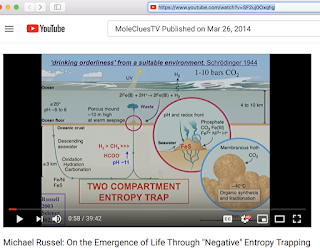 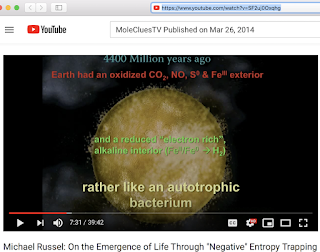 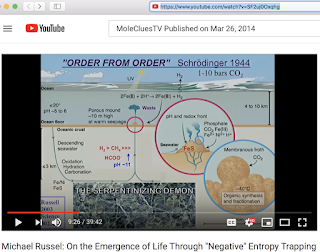 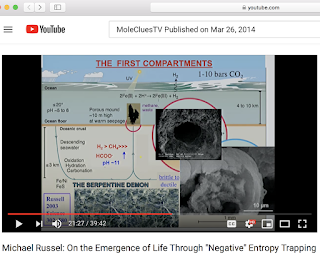 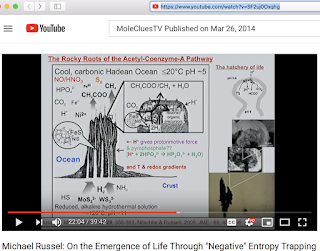 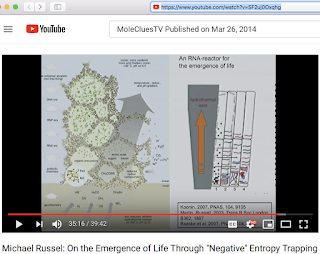 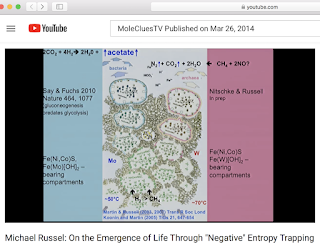 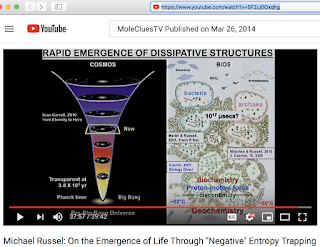 The alkaline hydrothermal theory for the emergence of life holds that the endergonic (thermodynamically uphill) reactions vital for life's origin and continued existence require free energy converters (nano-engines) fuelled by various disequilibria. The first two primary engines were i) a carbon fixation engine to generate the organic building blocks of life by reaction between hydrothermal CH4 and H2 with the CO2 and NO in atmosphere and ocean, ii) a proton pyrophosphatase engine exploiting the natural pH gradient between alkaline hydrothermal solution and acidulous ocean to drive biosynthesis by condensations of these same building blocks.

To this end there occurred on the early Earth and other such rocky bodies, inorganic prebiotic molecules that would have been precipitated at the interface between a submarine alkaline hydrothermal solution and the metal-bearing acidulous ocean.

Dr. Russell will show how these metals, especially iron, occurred as readymade nano-scale sulfides and oxides with the same structures and valences as the active centers of those biotic metalloenzymes shown to be present in the Last Universal Common Ancestor of all life. 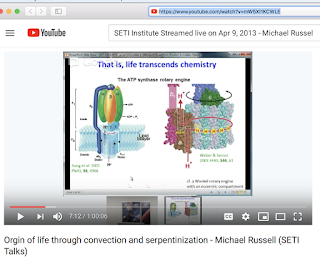 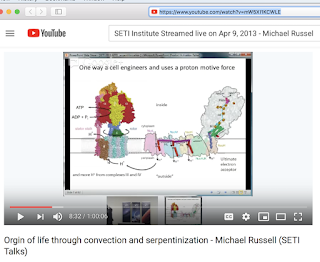 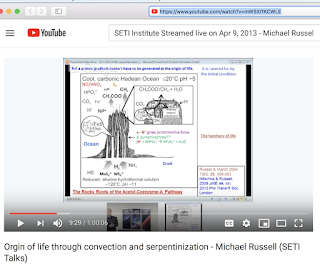 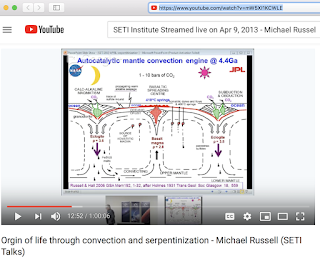 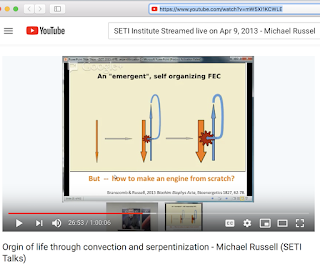 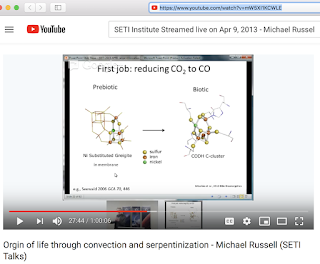 Mike Russell found his moment of inspiration on a warm spring evening in Glasgow in 1983, when his 11-year-old son broke a new toy. The toy in question was a chemical garden, a small plastic tank in which stalagmite-like tendrils grew out of seed crystals placed in a mineral solution. Although the tendrils appeared solid from the outside, when shattered they revealed their true nature: each one was actually a network of hollow tubes, like bundles of tiny cocktail straws.
At the time, Russell, a geologist, was struggling to understand an unusual rock he had recently found. It, too, was solid on the outside but inside was full of hollow tubes, their thin walls riddled with microscopic compartments. It dawned on him then that this rock …
… What seemed obvious to Russell was that his hypothetical chemical gardens could solve one of the deepest riddles of life’s origin: the energy problem. Then as now, many leading theories of life’s origins had their roots in Charles Darwin’s speculation of a ‘warm little pond’, in which inanimate matter, energised by heat, sunlight or lightning, formed complex molecules that eventually began reproducing themselves.
For decades, most origin-of-life research has focused on how such self-replicating chemistry could have arisen. They largely brushed aside the other key question, how the first living things obtained the energy to grow, reproduce and evolve to greater complexity.

Life took root more than four billion years ago on our nascent Earth, a wetter and harsher place than now, bathed in sizzling ultraviolet rays. What started out as simple cells ultimately transformed into slime molds, frogs, elephants, humans and the rest of our planet's living kingdoms. How did it all begin?
A new study from researchers at NASA's Jet Propulsion Laboratory in Pasadena, Calif., and the Icy Worlds team at NASA's Astrobiology Institute, based at NASA's Ames Research Center in Moffett Field, Calif., describes how electrical energy naturally produced at the sea floor might have given rise to life. While the scientists had already proposed this hypothesis -- called "submarine alkaline hydrothermal emergence of life" -- the new report assembles decades of field, laboratory and theoretical research into a grand, unified picture.
According to the findings, which also can be thought of as the "water world" theory, …
~~~~~~~~~~~~~~~~~~~~~~~~~~

Life on Earth may have begun in rocks on the ocean floor. More than 4 billion years ago, tiny cavities in minerals may have served as the first cells, two biologists are proposing1. Other researchers argue that the idea leaves many questions unanswered.
The key to the new theory is iron sulphide. Hot springs deposit a honeycomb of this mineral on the ocean floor, with pockets a few hundredths of a millimetre across. This would have been the ideal place for life to get going, say William Martin, of Heinrich-Heine University in Dusseldorf, Germany, and Michael Russell of the Scottish Universities Environmental Research Centre in Glasgow, UK. …

Then there aways seems to be a bit more… ever more folds within folds of cumulative harmonic complexity flowing down the cascade of time, for the receptive and perceptive.