Pageant of Evolution (1), the warm up. 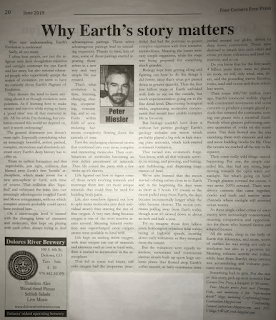 A couple month's ago I was feeling guilty for not submitted anything to the Four Corners Free Press in a while.  Also I'd been all involved in that filthy downer job of sorting through Jim Steele's "What's Natural?" deceptions and I needed something positive.

So, with days to go before deadline, I decided to write about the Pageant of Evolution.  I cheated by rewriting the evolution pitch off this blog.  I though it would be a cinch since I think about Evolution a lot anyways.

During those days (and since) I tapped into a wonderful vain of scientific lectures on YouTube regarding latest findings in "origins" research, as well as the Evolution process in general to help refresh my memory and to get my creative juices flowing.

Instead I wound up chagrined and annoyed by how out of date I'd allowed myself to get.  But as they say, the project is never finished you only meet deadlines.  So even as I was summiting this column, I knew I had to give it another shot.  I'm sharing this Pageant of Evolution #1 because I want to explore my own learning process and the development, dare I say evolution, of my understanding.  Sharing the agony of defeat, along with the joy of victory and constructive learning.

Besides being chagrined, I was thinking of times I'd referred to myself as a student of climate science and now feeling mighty silly about that conceit.  I may be a genuine "Student of Life" but I'm no scholar, no "Student" - I come to realize, to appreciate, that I'm a self-taught "Enthusiast," a lover, a poet, Earth and life are a stage and experiencing it is my game - with science being my clearest path to better understanding my observations.

A real student of science possesses a discipline, a focus and sticktoitiveness I can't muster.  I'm like a happy puppy dog were every new scent is a fascinating adventure.  Though at 64, a creakier puppy for sure, oh but what a collection of experiences and learning.

I've been marveling at this world I was born into from my first look around, and in many ways I've remained on the outside looking in on our modern society.  I remember the young child being shown the wonderful dioramas at the Chicago Museum of Science and Industry of our near perfect future and remember thinking with doubt, we'll see about that.  A natural born skeptic.

Now I look back six decades and what we've achieved in that time.  The modern marvels are truly awesome beyond belief, but we sold our souls for it.  This we did by ignoring all of "progress's" dark sides, allowed them to fester and grow, while we pretended the Laws of Nature could be suspended for our comfort and gluttony.

Today instead of that wonderful future living, we have a society slowly but surely disintegrating back into a new round of hatred and Willful Ignorance, with a new sort of Dark Age settling in.

All the while the heat continues warming our oceans.  Our thickening skies ensure that our cryosphere and biosphere will continue ever so slowly broiling away - we're creating a brave new world requiring a radically different set of survival skills.  But we'll remain too busy blaming each other and grabbing what we can get away with, so there won't be any time left for constructive learning.

Back to me, thanks to a wonderful alignment of stars and the minimalist attitude of a grateful immigrant I'm relatively numb to most of today's programmed desires.  Also choosing to spend my years living offsides in USA's outback paying attention to my days as they roll on by, rather than obsessing over my portfolio, has helped.  It's not how much you earn, it's how much you spend.

This sort of living within a natural rural settings and thinking outside the box affords me an Earth Centrist's perspective that no one embedded within professional careers, mortgages, and accumulating stuff is capable of, no matter how groovy they fancy themselves.  It's not meant as an insult, it's simply a fact of life.  Freedom is just another word for nothing else to lose.   {sure why not.  ;-)}

One of the neatest clarifications that's been driven home for me recently is that biologists realized they cannot understand an organism's insides without also having a thorough understanding of the outside environment that organism exists within.  So it is with us.

Now I enter a new phase of my blogging adventures, trying to convey some of the wonder inherent within our Mother Earth's Story . . .

Sadly all too many.

I often hear people, not just the religious with their thoughtless rejection and outright contempt for our Earth and her story, but also rational educated people who superficially accept the notion of evolution, yet who seem to have little curiosity about Earth's Pageant of Evolution, even voicing complete disinterest.

Too many dismiss the need to learn anything about it as though Evolution were pointless. All the while I’m thinking, but evolution created this world we depend on, why isn’t that worth embracing?

From it’s earliest formation with that improbable, but oh so perfectly aimed collision that ‘liquified’ the planet, then reformed that mess into our amazingly advantageous coupled Earth and Moon arrangement, without which complex animals probably could never have evolved on Earth.

On a microscopic level it started with the changing brew of elements and molecules that kept on playing with each other, always trying to find advantageous pairings. Those select advantageous pairings lead to cascading sequences. Thanks to time, lots of time, some of those pairings started repeating themselves in new ways.

Evolution is the passage of generations within their constantly changing environment. To survive one must learn, adapt, change, and be fruitful.  It wasn't always the fittest, sharing and cooperating turns out to have a great deal to do with survival.  As does plain old luck, being in the right place at the right time, rather than the wrong one on a bad day.

So it began with elemental atoms getting concentrated here on Earth, then combining into ever more complex and interesting molecular bundles. Some of these combinations of molecules evolved and diverged into ever richer assortments of minerals. Then life joined the party bringing along a few tricks.

Life figured out how to ingest some of those newly evolving minerals and rearrange them into yet more unique minerals that could then be used for building body parts.

Life also somehow figured out how to split water molecules into their individual atom’s thus starting the rise of free oxygen. A very rare thing because oxygen is one of the most reactive atoms around. Meaning mineral evolution was supercharged once oxygen atoms were available to bind with elements and minerals.

Life kept on making more oxygen, with time oxygen ran out of minerals and elements such as iron to bind with, it then started to accumulate in the atmosphere.

That led to some real losers, still only oxygen had the “reducing” properties with the potential to power the complex organisms requiring intensive metabolic activity. Meaning the losers were quite simple organisms, while the stage was being prepared for something much grander.

Life, that is biology, kept busy getting along and figuring out how to do the things it did better, since that’s what got passed down in greater quantity. During Earth’s first two, three billion years life was constrained by the limitations of Earth’s toxic environment.

Scientists have learned that in order to understand a cell, they needed to understand its environment as much as the cell’s interior.  This appreciation goes a long way to explaining why life remained at the simplest level for so long.  Earth's toxic environment.

It should be no surprise there was little to see on the outside, cells were responding to a hostile environment, still generations were living out their lives and experimentation was going on at the fine detail level.

Life was busy discovering biological tricks, engineering the molecular components that would, over the course of billions of years, learn to fit together with other components, eventually enabling complex life to blossom.

But, Biology couldn’t have done it without her partner Geology! Earth’s geology includes our moon which probably played a vital role in kick starting plate tectonics, which kick started continent formation.

Tectonics became evolution’s forge. You know, with all that bulldozing, mixing, and pressing, and baking, and volcanic activity, and so on.

We’ve also learned that the moon started orbiting rather close in to Earth and in the beginning the days were as short as 5 hours. Try to imagine those first billion years with truly humongous relentless tidal waves racing fast as jets, mowing down early volcanoes as they emerged from the oceans.

The volcanoes were equally relentless, continental shelves and mountains slowly built up upon huge tectonic plates that floated atop Earth’s softer mantel.  They were jostled around our globe driven by deep down convection currents. Which destined them to smash into each other and create yet more volcanoes and land formations, and gases for our atmosphere and so on.

Try to imagine those first nearly four billion years, there were no plants, no roots, no soil, only wind, rain, rivers, and the pounding waves - erosion, rocks, sand, and the ocean and those relentless waves.

Then some six, seven million years ago, among with geochemical changes, Earth’s rotational wobble aligned with continental movements and ocean currents to produce a couple glacial periods that covered the continents, turning our planet into a Snowball Earth. Periods when glaciers pulverizing massive quantities of rocks on the continents (as in a mile's worth and more). This then flowed into the seas enriching them with mineral nutrients and more building blocks for life. Over the oceans ice reached all the way to the equator.

Then some really wild things started happening. For one, the simple single celled life, that had any sense, kept moving towards the open water and sunlight. See what’s going on here? Though glaciers covered the oceans, it was never 100% covered. There were always currents that came together, cracks and leads and narrow water channels where sunlight still accessed ocean waters.

These single-celled critters of every variety were increasingly concentrated, meaning competition and opportunities for those who learned fastest and adapted bestest.


All the while, deep in the belly of Earth the kilometer and more worth of glaciers was acting as insulation holding in the heat that was rising up from the core.  The weight of the ice also acted as a pressure lid. Meaning volcanic activity was stifled, while heat from Earth’s deep interior was accumulating and volcanic pressures were increasing.

Posted by citizenschallenge at 11:59 AM