Although I can't find quite the right video for this section, I do have a couple of excellent presentations by scientists to their colleagues.  It's more nitty-gritty than I usual share over here, but it is on the topic - along with being more wonderful examples of What Serious Scientists Sound Like. 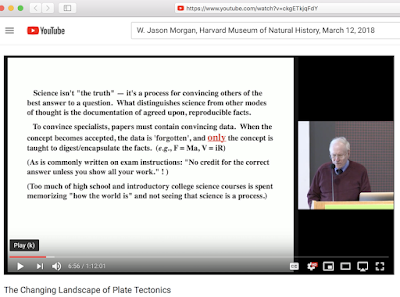 This second of four forums will focus on how our planet’s geological activity set the stage for the rise of life. Get up close and personal in our town hall setting with the experts whose discoveries are linking our planet’s most-fundamental processes to the origin of life. There are aspects of our planet’s geology that have not been observed on other worlds and it turns out that they could be crucial for creating the conditions that allowed life to thrive here. For example, the deep Earth activity that drives plate tectonics could have introduced the cycles of chemistry that laid the groundwork for life’s origin.

Plate tectonics may have driven the evolution of life on Earth
Ross Large, John Long, July 15, 2015

The essentials for life
We used laser technology housed in the Earth Science laboratories at the University of Tasmania to analyse more than 4,000 pyrite grains from seafloor mudstone samples collected from around the globe.
This enabled us to determine how concentrations of trace elements in the oceans have varied over the 700 million years. Trace elements included copper, zinc, phosphorus, cobalt and selenium, which are necessary for nearly all life – from marine phytoplankton through to humans – to function.
The most surprising finding was that there were certain periods in Earth’s history when nutrient trace elements were highly enriched in the oceans, and other periods when levels of these critical trace elements were very low. …
Plate tectonics and nutrient cycles 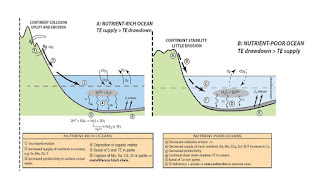 … This is the first time nutrient trace element curves have been developed that demonstrate the relationship between tectonic collisions and the generation of cycles of nutrients.
While the link between these nutrient cycles as drivers of evolution and factors in mass extinction events remains to be proven, it really makes us think about evolution in a broad sense. Plate tectonics and evolution both operate on the same time scale of millions of years, and it seems logical that they could be causally related.
The relationship between increased nutrients in the oceans with bursts of evolutionary change are clearly correlated for the early part of the cycles, but less clear is the correlation with the evolution of advanced land animals. …”
{That makes sense.  All of Life’s biological structure and details evolved in the oceans by microscopic components that received nutrients via their watery environment and the tiny particles within it.

Plate tectonics processed and reprocessed the raw materials of Earth.  Once that had been sufficiently done, the critters that tool kit enabled survived by an entirely different process, feeding on plants and each other for the most part.  So of course plate tectonic’s influence would become less significant, or perhaps better said its impacts moved onto other realms.

Your answer can only be as good as your question!
After the Cambrian radiation of animal life, it’s all been variations on a theme, with a well defined biological “tool kit” which was created during those early billions of years when plate tectonics was still taming Earth.}.

Abstract
The concentration of atmospheric oxygen (pO2) is thought to have increased throughout Earth history, punctuated by rapid increases ca. 2.4 and 0.8 billion years ago near the beginning and end of the Proterozoic Eon.
As photosynthesis is the largest source of free O2, the reigning paradigm of rising O2 levels centres around biologic metabolism. Here we show that the phosphorus content of igneous rocks correlates, in a first-order sense, with secular increases in O2 through time, suggesting that rising O2 levels are affected by long-term mantle cooling and its effect on the continental phosphorus inventory.
Because phosphorus is the limiting nutrient for primary productivity, its availability has fundamental control over the efficiency of oxygenic photosynthesis, pointing to a previously unrecognized role of the solid Earth in biologic and atmospheric evolution. Furthermore, as many bio-essential elements are effectively incompatible in the mantle, this relationship has implications for any terrestrial planet. All planets will cool, and those with efficient plate tectonic convection will cool more rapidly.
We are left concluding that the speed of such cooling may affect pattern of biological evolution on any habitable planet.

DID PLATE TECTONICS SET THE STAGE FOR LIFE ON EARTH?
By Lisa Kaspin-Powell - Jun 7, 2018

A new study suggests that rapid cooling within the Earth’s mantle through plate tectonics played a major role in the development of the first life forms, which in turn led to the oxygenation of the Earth’s atmosphere. The study was published in the March 2018 issue of Earth and Planetary Science Letters. …

Life with and Life without Plate Tectonics
https://www.youtube.com/watch?v=ak-IKxgaZ5Q
AGU   Published on Sep 30, 2016

Abstract:
The long standing notion that plate tectonics is key to planetary habitability is critically evaluated. The purported necessity of plate tectonics for planetary habitability is tied to volatile cycling, atmosphere retention, and carbon burial.
Plate tectonics is not unique in allowing for cycling of volatiles between the interior of a planet and its atmosphere. Volcanism can be maintained on a single plate planet over geologic time scales and several non-plate tectonic recycling mechanisms are viable on such a planet. The frequency and efficiency of these modes of volatile recycling and volcanism are critical to evaluating whether they are sufficient to stabilize climate. An episodic mode of a volcanism and subduction also has the potential to provide the level of volatile cycling needed to maintain habitability.
We combine solid planet models of degassing and regassing with climate, surface processes, and carbon sequestration models to determine the level to which habitable conditions can be maintained in the absence of plate tectonics. We also review arguments that the Earth operated in a different tectonic mode over its initial 2-3 billion years of geologic evolution, a time period over which the planet was habitable.
Collectively our results suggests that habitable conditions can exist independent of the tectonic mode of a planet. However, O-rich atmospheres and complex life might require continuous recycling processes and ocean floor uplift to bury carbon onto stable platforms as provided by plate tectonics.

Worth mentioning is that Ron Blakey’s work and Wayne Ranney’s interpretive lecture do a superb job of illustrating the changing face of Earth over Deep Time.  It’s a great supplement detailing what was going on under neither that surface.
~~~~~~~~~~~~~~~~~~~~~~~~~~~~~~~~~~

I wasn't able to add the detail I wanted to since my hands have been full.  ;-) 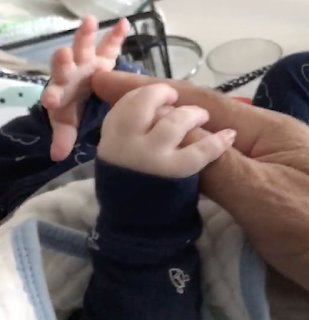 Posted by citizenschallenge at 10:29 PM