When looking up Cambrian Period information you'll get flooded with Creationist Intelligent Design propaganda.  Stuff that freely misrepresents the facts and their "opponents," instead coming up with disconnected just so stories in complete disregard of the full spectrum of available understanding - so beware. 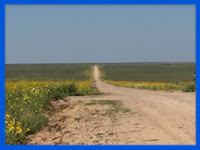 That is why I'm sharing this comment that I originally penned for a discussion over at Center For Inquiry's Forum.  It belongs here since a better understanding of the difference between religious thinking and serious scientific thinking is worth trying to push into the public consciousness!

The challenge is clarifying the key difference between Religious Thinking and Scientific Thinking.  Both of which are products of our Human Mindscape.

It starts with acknowledging that all we see and experience, is through our senses and then processed by our brains to the best of our individual learning & abilities.

The "Mindscape" is just that, our mind, the product of our body, nerves, brain and all we sense along with our emotions and thoughts.

Religions are all about our “Mindscape" itself, with it's constant dialogue and self-story telling and fears, emotions and needs.  Its freedom to poetically tie together whatever it wants.  It is the realm of the metaphysical thoughts and daydreaming and story telling.

Very important because its those stories that tie humans together and make community and civilization possible.  It's reflected in our need for getting together and celebrating, often with ritual ceremonies those things that are common to all humans, birth's, coming of age, marriage, children, witnessing and aging, deaths and repeating those cycles within the constantly changing roles we ourselves live out, as the seasons and decades pass us by.

Wondering, dreaming, storytelling and creating explanations for feelings and events that naturally evolve into religions.  Religion was among the first things humanity's Mindscape achieved - there is good reason for that.
The important thing to appreciate is that science is sort of the same, but different.

Whereas Religion and Gods were among our earliest achievements, it took thousands and hundreds of thousands of years, if not millions depending on how finely we want to split hairs.  In any event, not until roughly 500 years ago did people’s observational and thinking abilities mature enough to enable us to create science.  Just as humanity created religions.

But science wasn’t about our inner emotions, insecurities and fear of death. Science was, is, about wanting to soberly and objectively understand the physical creation we exist within.

Science is what happened out of that need.  Personal feelings be damned!
It seems to me (and I'm waiting for someone to correct me) that science is at its most fundamental a set of rules and expectations on how to observe and discuss those observations of our natural world.

Honesty is a fundamental law within the scientific community.

Openness within that scientific community of learned, competitive, skeptical people looking over each others shoulders is our guarantor.

The learned have always acknowledged the unreliability of our "Mindscape" that’s why science never speaks in certainties, it speaks in probabilities.

As for "proofs" - those are reserved for mathematics since nothing in Earth Sciences is ever proven or settled, further learning and refinement of our understanding will always happen and it makes life fun.

You've heard of our greatest scientific theories: the theory of … While they provide very strong evidence for those theories, they aren't proof. In fact, when it comes to science, proving anything is an impossibility. …

Reality is a complicated place. All we have to guide us, from an empirical point of view, are the quantities we can measure and observe. Even at that, those quantities are only as good as the tools and equipment we use to make those observations and measurements.  …

We also can't observe or measure everything…  At some point, we have to extrapolate. This is incredibly powerful and incredibly useful, but it's also incredibly limiting.

In order to come up with a model capable of predicting what will happen under a variety of conditions, we need to understand a few things.

If you understand these things, you have the right ingredients to formulate a scientific theory: a framework for explaining what we already know happens as well as predicting what will happen under new, untested circumstances. …

After this Siegel loses his way a bit by getting lost within our mindscape and then he forgot to make clear that in the final analysis, science is an effort to soberly and honestly understanding how the physical world operates.

That could have then been worked into mentioning, or perhaps appreciating says it better, that there is a distinct difference between the Map (science) and the Territory (physical reality) worth recognizing.

Posted by citizenschallenge at 8:23 PM